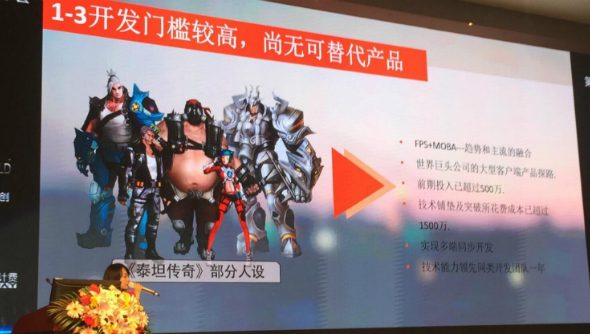 Screenshots and character art for upcoming possibly-for-mobiles shooter League of Titans has appeared in a Chinese developer’s investor pitch and we’ve never seen anything like it before.

Weird, we don’t seem to have League of Titans in our upcoming PC games list…

Nope, none of those characters look similar to anything by Blizzard Entertainment, part of the world’s largest gaming conglomerate Activision-Blizzard who have an entire, extremely litigious, army of lawyers on hand at all times.

We’re absolutely certain that Streetpig and Rhineheart and The Pharoah are totally unique, original characters and that no-one need concern themselves with similarities between the HUD icons of League of Titans and, to pick an upcoming game entirely at random, Overwatch.

The slides, unearthed by Redditor Rebirdhk, appear to show a game in an early phase of development seeking investors for an “FPS+MOBA” hybrid, which apparently runs on an iPhone 3GS.

We’re not saying China’s copyright laws are non-existent enough to let this go through, but Overwatch’s (eventual) Chinese region release could end up with some familiar competition.

League of Titans is a nice touch, in case anyone was going to forget the failed Blizzard project code name Overwatch spawned out of.