Blizzard’s newest IP, Overwatch, is still a ways off getting into the hands of the general public, but that hasn’t stopped them from teasing new content. Two new heroes have been demoed at this year’s PAX East: a western bounty hunter called McCree, and a Russian fusion gun wielding soldier, Zarya.

Both, along with a new payload map set in Gibraltar, will be available to play with in the Overwatch beta test, which is set to launch fall of this year.

PAX East is still delivering a torrent of Blizzard news – the latest being a new adventure coming to Hearthstone: Blackrock Mountain. Back to Overwatch however, and we’ve got two new characters to debut.

Jesse McCree is a famous bounty hunter, operating in New Mexico. He was part of the formerly known Overwatch defense force, helping keep the world in a perpetual state of peace.

With his lighting fast Peacekeeper magnum at his side, McCree has little issue in taking down his targets in quick fashion. For the tricky ones, McCree can also throw out a flashbang to stop them in their tracks, and daze them. If he’s still having issue, his ultimate ability, Deadeye, can dispatch any enemies in his field of view after a short acquisition time.

Unlike McCree, Zarya, allegiances lie with the Russian Defense Forces; her home, family and friends. For her country, Zarya is willing to make any sacrifice when it comes to its protection.

Powered with fusion based technology, Zarya wields a hefty Particle Cannon, which can either channel a focused beam of death, or lob orbs of energy at a distance. Another ability of the Particle Cannon is being able to apply a barrier to herself, and her allies, which will absorb a decent chunk of damage. Also, whenever the shield does absorb damage, it will charge her cannon to deal even more damage. Her ultimate ability throws out a gravity well, which pulls all enemies caught within its grasp to the center of impact. 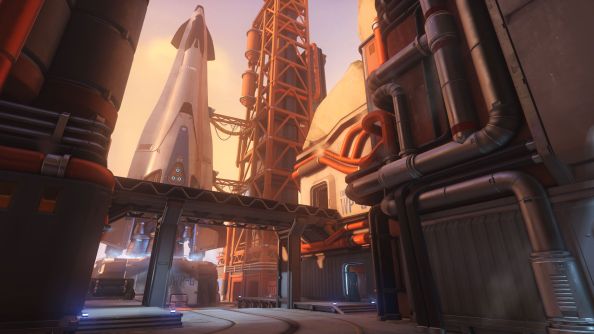 A new map was also teased at the Blizzard Overwatch panel. Watchpoint: Gibraltar is a payload styled map, where human-like gorilla Winston is trying to revive the Overwatch satellite program. Players must defend the new drone payload as it makes its way to the rocket, ready to launch into Earth’s orbit, while the enemy team must try and stop them.

Overwatch is set for a beta release in fall this year. Make sure you’re signed up to the beta by clicking here.