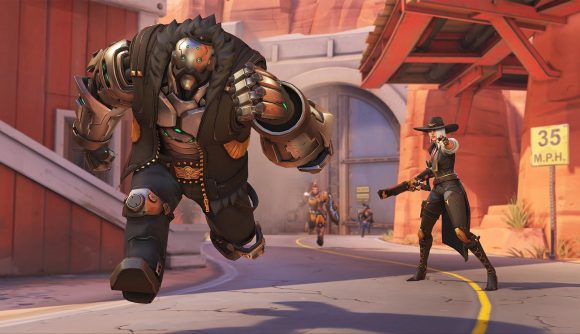 Blizzard’s Jeff Kaplan has continued his antics by telling fans who the next Overwatch hero won’t be. Reddit’s u/Seagull_No1_Fanboy compiled information from a  Storm Rising playthrough with streamers, where the game director also hinted at features.

For the unfamiliar, the Jetpack Cat character appears in some of Brigitte’s sprays and a victory pose. Ever since players have been joking that the furry friend will become playable. It seems that even for Kaplan, that strays too far into meme territory.

Still, his statements put to bed some of the popular fan theories. Both characters have been referenced in one way or another, Echo in an animated short, and Sojourn in Storm Rising. Meanwhile, Kaplan says there are “big plans” for Junker Queen and Maximilien.

Players are expecting Overwatch’s 31st hero sometime in May or June, provided Blizzard sticks to its usual pattern. However, other than jokes about Mama Hong, there’s no concrete hint of who players can expect.

Related: Here are the best Overwatch characters in each class.

However, Kaplan does reveal that D.va will get a skin that “breaks the internet” for the anniversary event, which will also debut a feature nobody has asked about. On top of that, two requested features will be coming to the game this summer or in late fall.

Unfortunately, Kaplan doesn’t think Overwatch will be coming to the Switch any time soon, nor will it become free to play. In better news, though, Havana will make its way to the PTR in the near future, as well as a “very cool PvP surprise”.

After the success of a deaf Overwatch player last week, Kaplan says Blizzard will be adding more accessibility options to the game. He makes specific mention of a subtitle system for those with hearing issues, as well as more methods to aid the visually impaired.

We wanna do better. We know we’ve done some stuff, but there’s always room for improvement,” he says.”Not only for visually impaired but for hearing impaired people too…for example, we’re really excited to do a subtitle system someday, there’s just a few challenges we have.”