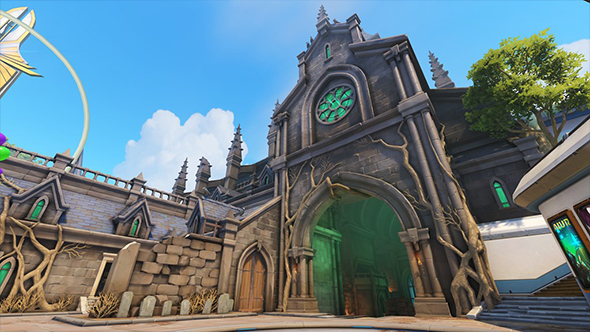 The biggest Overwatch news at BlizzCon was undoubtedly Moira’s totally rad David Bowie-inspired costumes, but let’s not forget our impending trip to Blizzard World. The new map will see the roster shooting it out in a theme park filled with Blizzard attractions, which means returning to plenty of locales and characters we haven’t seen for a long time.

Find out everything there is to know about Moira.

“The team and I had so much fun working on Blizzard World because many of us have worked on lots of other Blizzard games,” says Michael Chu, Overwatch’s lead writer, about the making of the map. “I’ve worked on many of them myself. We thought that the chance to do our love letter to the other development teams and the universes of Blizzard that we love was so much fun. It was truly a labour of love.”

Chu says there are so many references packed into Blizzard World that even he’s often surprised by the reminders of what he and the rest of the team packed in. “I would advise everyone to really comb through, preferably not while a match is going on, your team will be unhappy about that. I don’t know if there’s a reporting category for that yet,” he laughs. We checked: there isn’t.

It’s not all visual details, either, since Chu says there’s plenty of new dialog from the park itself. “I don’t think people have really talked about this, there’s different PA announcers in the park. Each of the StarCraft, Warcraft and Diablo areas have their own announcers. In the Warcraft section is Uther – Uther is telling you welcome to the Hearthstone tavern, he’s giving you the ride [instructions]: ‘please keep your hands and arms inside the gryphon at all times, they get hungry sometimes.’ He does all of that and it’s hilarious. In the StarCraft area it’s the Terran Adjutant doing the same thing.”

Yet, as a veteran of Diablo development, Chu’s absolute favorite is the return of Deckard Cain’s voice to serve as the PA announcer for the Diablo zone. “He has one of the saddest lines,” says Chu before giving us a really impressive Cain impression, “he says something like ‘oh, I see that Leah is missing and her parents are waiting for her’ and then he realises and he’s like ‘oh, that’s so sad.’”

Chu counts recording Deckard Cain again as one of the highlights, but promises there are plenty more fun things to discover in Blizzard World. We’ve still got a while longer to wait before diving in ourselves, since Moira’s just hit the PTR without Blizzard World, but we should be seeing the map soon enough.