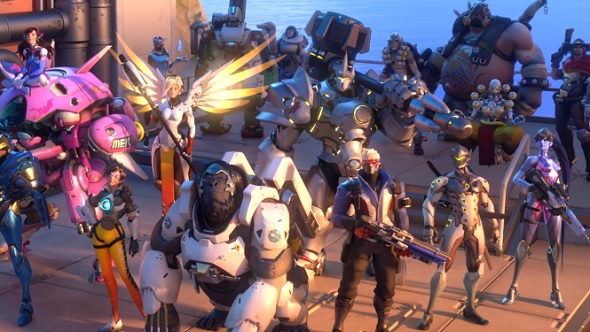 Overwatch has plenty of character, but plot tends to come in smaller bits and pieces outside the game. That’s to be expected from a multiplayer shooter, but Blizzard’s world has proven so engaging that everybody wants more.

Find out what’s going on with Overwatch’s 1.17 update.

Michael Chu, Overwatch’s lead writer, agrees. “I would say generally I always want more,” says Chu. “I’m never happy, y’know. We have a goal to continue to make more stories, get more of them out there. There’s such an appetite for the Overwatch universe – we have laid a lot of plans in this 30-year-and-growing story of Overwatch.”

Of course, the beloved animated shorts – like the Reinhardt story debuted at BlizzCon – will continue. Chu also feels they’re onto something with more traditional animation. “This year we tried something new with Doomfist, with the 2D animation, the team was just so excited because we always felt that Overwatch would be great realised as kind of a 2D cartoon,” speaking to the team’s love of anime.

About the future stories we can look forward to, Chu obviously says he can’t reveal anything specific. “But I can say that we have a general goal on the comics side. We’d like to do longer comics, we feel like that will enable us to do more in-depth stories, let some of them breathe a little more. That’s definitely a goal for us going into the next year.”

That’s all well and good, but that’s animation and comics are how most of Overwatch’s story has been delivered so far. What about more in-game storytelling? While so far much of the team’s development has been about the arcade and new support for esports, they are planning to add more of the world’s lore into the game itself.

“Ideally we’d love for people not to have to go hunting on the internet for various pieces of lore. It’s just one of those things that hasn’t quite made it into the game yet, we have plans for it, we sort’ve got the first part in which was the really basic lore blurb, the skin flavour text. It’s definitely something that we still want to do and hopefully we’ll be able to get to it at some point. We don’t want to just copy and paste a text field on to the hero gallery.”

Chu also has plenty of affection for the rest of Blizzard’s library, and spoke to us about bringing Blizzard World to life.