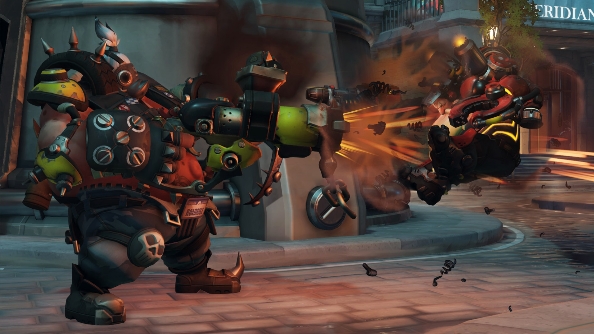 When Overwatch first launched I was drawn into its chaotic world due to something I didn’t expect: it’s a really friendly game. Blizzard games are typically fiercely competitive affairs that don’t take too kindly to newbies, but instead of anger and superiority complexes, early Overwatch matches were filled with joy and laughter.

And then competitive mode happened.

Join in the action with some of the best multiplayer PC games around.

Competitive Play was added a few patches back and introduced a ranked ladder system to the game. After playing ten placement matches, players are assigned a rank which increases with competitive mode wins and decreases with losses. Anyone with a profile level of 25 or above can play, in seasons that last two-and-a-half months. This mode is a distinctly stakeless affair: aside from an animated spray and two special icons for the top 500 players, there’s nothing really to win. No prize funds, no big surprise gift for the winner. And you only need to get past the placement matches to bag yourself the season-exclusive new player icon and spray tag.

Here’s the problem. Despite not having any huge rewards, competitive matches feel like gangs of vicious army officers coming to blows. Voice chat crackles with the growls and snarls of people demanding their team mates do this and that, while the text chat scrolls like an asterisk-studded Star Wars opening crawl.

When playing competitive I tend to opt for Mercy, as I know she’s my strongest role. Yet despite the gold medals and high points for healing, the entire team is ready to blame me for momentary demises.

“Mercy, I was JUST THERE!” types a furious Genji, apparently insistent that he is a priority over my two other patients (who are actually in greater need of healing). Of course he has no way of knowing if he should be a priority since he can’t view allied health guages in the same way I as Mercy can. Only I can see who requires the light of the healing rod.

On another match I play Pharah, again one of my stronger roles, and play a pretty standard game. Nothing outstanding, but plenty of good direct rocket strikes and kills.

“We had a Pharah!?!?” exclaims one player in the stats screen after our defeat. “How did we lose?” Another player on the team tells me I’m not high level enough for competitive, insisting I go away to quick play where I “belong”. These are sanitised versions for the sake of keeping this article clean, but you get the picture. The most notable thing is that in each match it isn’t just me who’s receiving blame for team failures, but everyone. Regardless of if you are a top-tier player with hundreds of hours behind you, or someone on their first competitive game, you are at fault for something. And with the exception of just a few matches, competitive mode feels this oppressive all the time, come win or lose.

Some of this is almost certainly down to the lack of any scoreboards, which comes with its pros and cons. Without a list of players ranked by performance, no one can be singled out and bullied for being the ‘worst’ player. But rather than preventing any toxicity, in competitive mode the absence of an identifiable weak link just seems to mean that everyone is considered a valid target for vitriol.

Four hours into competitive, I bowed out. “This is it,” I thought, “the elitist trolls have taken over”. I feared my enjoyment of Overwatch was over.

Thankfully I was wrong. Reverting back to quick play mode, I found the friendly camaraderie for which I adore Overwatch so much remains stoic. Here there’s a thumbs up for every heal, a wave to everyone before the doors open.

My most recent game saw me play Bastion among a team of five Anas, defending on Numbani. The enemy team weren’t quite as enamoured with Overwatch’s new medic sniper character, and so opted for a balanced group. We shouldn’t have stood a chance. Yet friendly teamwork kept our rag-tag team together, winning us the match without the objective vehicle making it past the second checkpoint.

“Bastion, I LOVE you!” typed one of my Ana comrades after I racked up a triple kill, preventing the enemy overwhelming us. It was a compliment that genuinely made me grin.

It’s as if Overwatch is a land divided by a great river, with two separate populations living on either side. One is a relaxed group of trigger-happy hippies, the other a pack of hungry wolves. The point of confusion is that surely these two groups intermix: with the wolves being pleasant in quick play while the hippies go feral in competitive. I’ve looked at the reasons why players are abusive online before, but generally there’s not quite the divide between game modes that I’ve been experiencing in Overwatch. So what is it about a number that makes players so angry? Because that’s all I can put it down to: the only thing you risk when playing competitive is your ladder rank dropping. A rank, I should add, that gets reset every season. Is that numerical indicator of your skill so important that people will belittle, insult, and attack each other? For some, apparently so.

I’m not on my own in these experiences. Colleagues at this site and friends at other publications have told me they’ve seen similar behaviour trends. And while for some players their experiences may differ, these occurrences show that not even the cartoon visuals, lack of leaderboards, and promotion of friendly emotes can block out this seemingly everlasting problem in games.

But those elements are a push in the right direction, and I maintain my view that Blizzard have certainly made an attempt at forging a welcoming community. Both they and other developers now need to look forward and figure out what the next step is on the long path to eradicating online abuse.

Have you seen a big difference between quick play and competitive mode in Overwatch? Let us know your thoughts in the comments.