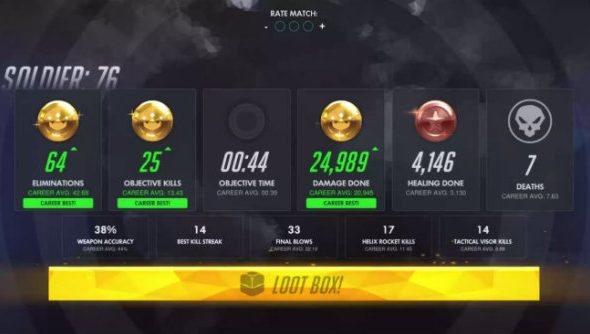 Update Jul 1, 2016: A post from community manager Stephanie “Lylirra” Johnson says that the bug has now been fixed.

Blizzard have acted fast and the bug is now fixed, according to posts on the forums.

If you like shooting other PC players in the face, check out our list of the best multiplayer games.

Here’s the announcement in full:

“Last week, several players reported that wins and losses on Control maps (Ilios, Lijiang Tower, and Nepal) during Competitive Play were not correctly influencing Skill Ratings. The exact problem causing this to happen was identified early this morning, and we were able to develop a fix shortly after. That fix has now been implemented on PC and Xbox One in all gameplay regions (and will be in place when Competitive Play goes live on PlayStation 4).

“Our sincere apologies for any inconvenience, but thank you so much for your reports and helping us making Overwatch a better game!”

Quick work, and it means one of the more fun game modes in competitive doesn’t have to be turned off. For more on what’s coming next for competitive play, have a look at our roundup of Overwatch’s planned summer patches.

Original story Jun 30, 2016:There’s an annoying bug in Overwatch Competitive Play that affects how much progress you make from winning games of Control. Players became suspicious when the game mode offered less points compared to other modes like Payload, and it turns out is was all down to this bug. Blizzard say they’re looking to fix it “ASAP”.

Players have been reporting gaining 30-50% of the bar for a win in Payload, while a game of Control – which can often last longer – will deliver only a 5% increase. Here’s a visual representation of that profound loss:

Previously, designer Scott Mercer said, “There are legitimate reasons for the magnitude of skill rating change to vary on a match per match basis, but we did get the feedback so we’re investigating to see if there’s a consistent bias or simply an error on Control maps (Ilios, Nepal, Lijiang Tower). If we can identify it, we’ll then work to address it quickly.”

Blizzard have since nailed down the issue, however, and are looking to fix it as soon as possible.

“Last night we uncovered a bug that is causing skill rating to not be adjusted properly in our Control Maps (Nepal, Lijiang Tower, Ilios),” said game director Jeff Kaplan on the game’s forums. “This bug is a top priority right now and we’re hoping to have a fix ASAP.”

Don’t worry about the progress you’ve made so far – it’s not going anywhere. Blizzard won’t be resetting skill levels, as the bug affects negative and positive movement on the progress bar, meaning nobody is at an advantage or disadvantage because of the bug.

Skill level is supposed to be a fluid thing, taking into account your team and the enemy team’s skills, doling out or taking away points based on how difficult or easy the encounter should have been, based on the stats.

The fix is planned to go live soon, though if Blizzard can’t supply a fix they will disable Control in Competitive Play until they do.