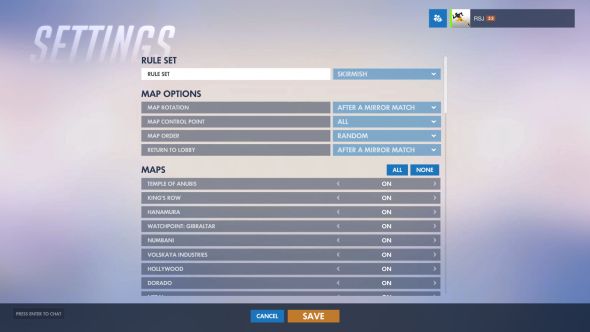 Blizzard are planning some improvements to Overwatch’s custom games, according to game director Jeff Kaplan. He was careful not to promise too much, but there’s reason to hope the community will be given the tools to create new game modes and even open them up to the public.

What’s next for Overwatch? Check out our tracker to see everything Blizzard have planned for the months ahead.

Compared to the arena shooters of the past, Overwatch’s custom games are a little bare-boned right now. Currently, players can select rulesets according to each of the main game’s modes, as well as maps, hero availability and selection rules. Things get more interesting when choosing from about a dozen different gameplay options, such as health, damage and ability cooldown modifiers.

Pining for a better way to play hide and seek, user RageCage started a thread on the Overwatch forumscalling for a few additions, such as the ability to change how long a round lasts as well as “setup and respawn time”, and the extension of the elimination mode rules beyond 3v3 games. Also on the wish list was the ability to save custom game settings – helpful, if you’d like to set up a game with a complicated rule set quickly.

“We have some improvements coming to Custom Game. I’m not sure we’ll get to all of the things on your list but we do have changes coming. The custom game lobby is getting an update as well.”

Kaplan has discussed changes to the custom game lobby before. Among the features he’s said are going on the list are the options to switch teams in the lobby, to change who is the lobby moderator and to enable all chat. More recently, he’s also said Blizzard will discuss ways to open custom games to the public and even enable XP gain.

Based on the context of the thread, a few new timing and rule set options doesn’t seem unreasonable. More optimistically, the ability to tweak gravity and/or jump force would be all I’d need to recreate one of the best Jedi Knight II server mods I ever played (unlimited Force Jump, disruptor rifle only, one-shot kills. Very like railgun/instagib in Quake III Arena.) But I won’t get my hopes up for that.

Anyway, a few more options and open games would be a great start. What custom game would you make in Overwatch, given the chance? Share your wacky rule combinations in the comments.