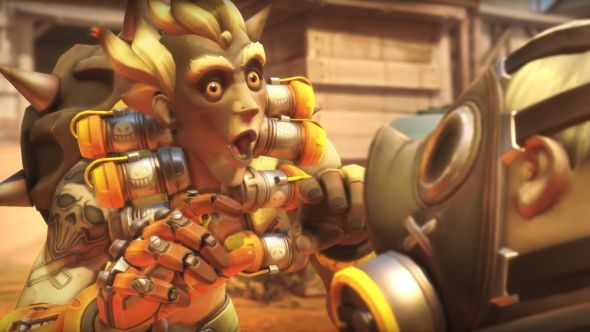 Yesterday, Blizzard had a bit of surprise waiting for those eager for more Overwatch stories. The in-game cinematic that introduced Junkertown, a new map, was created with brand new tech we hadn’t seen before. It was even more reminiscent of Source Film Maker than what we’ve seen already. The big question off the back of it is whether we’ll get to start making our own stuff with Overwatch’s assets? Sadly, not any time soon.

Here’s what we know about the next Overwatch patch, 1.15, which should hit PTR next week. D.Va changes!

“I think it’s a great idea,” cinematic director Terran Gregory says in response to a question at a roundtable during Gamescom about whether these tools could go public. “It’s something we’d consider, but not at this time,” he concludes.

This likely comes down to the differences between internal tools and external ones. Internal tools can have reams of documentation and bug fixers just down the hall, with no worries about exposing things they shouldn’t. External tools are a lot more open, and when you’re using in-game assets and burying into the files that can get dangerous. Turning one into the other will take a long time.

What the new tools do mean is plenty more in-game media from Blizzard. “This has opened up new technology that will allow us to tell even more stories in addition to the animated shorts,” Gregory says. It’s a new avenue alongside the comics they’ve been releasing.

It’s a lot simpler to make one of these rather than the full cinematic shorts like Dragons or The Last Bastion. Look at how each World of Warcraft expansion only gets one intro, but a dozen or more in-game movies to complement story points, with more patched in over time. This only takes weeks rather than months, even with the complexities of voice acting and everything else, so you should expect more.