The Church of Hanzo has been officially registered in Brazil. There’s a document to prove it and everything. So you’re not allowed to call anyone a ‘Hanzo main’ as a term of abuse any more, or else you’re committing hate speech.

Get the lowdown on Hanzo’s latest stablemate with our Doomfist guide.

The religion’s founding father is Matthew Mognon of Brazilian gaming site Adrenaline, who seems to have done it to satirise the ease with which you can get a church registered in his country. Google’s translation of his headline reads: “Opening a church in Brazil is so easy that I registered a religion for Overwatch.”

Mognon has posted a pretty official-looking document as proof that Hanzo fans finally have a place to sing the praises of their Scatter Arrows: 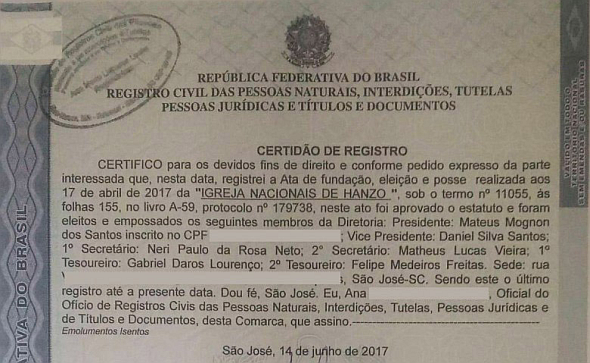 I say ‘Hanzo fan’ advisedly, because the term ‘Hanzo main’ is a sin in the new religion, and the last thing I’d want to do is cause offence. Rage quitting and hate speech online are also denounced as evil, and presumably grounds for excommunication.

But, like any good religion, following the tenets of Hanzoism has its rewards. You get one Tuesday off each month as a religious holiday to play Overwatch, and your baptism into the religion takes place through an Overwatch match (though item III, article 16 specifies that the free-to-play Paladins may be substituted, in case you can’t afford Blizzard’s shooter. They really have thought of everything.)