Hi, my name is Matt, and I’m a Mercy main in Overwatch. She’s the character I play the most according to my time-played stats. As you can imagine, the brand new rework for Mercy that’s currently on the PTR initially had me pretty worried. She’s been radically changed, and so my thinking was that the alterations could be so far-reaching that not only will I have to re-learn her from scratch, but I may never enjoy playing her again. If you’re a Mercy main too, you may be similarly concerned.

Catch up with everything that’s due to come in the next Overwatch updates.

Don’t panic, though: I’ve got good news. I’ve been playing her on the PTR and everything turns out to be fine. In fact, everything’s /better/ than fine.

Mercy’s iconic resurrection ultimate has been scrapped, meaning she can no longer revive her entire team in one tap of the Q key. Resurrect is now a normal ability on a lengthy 30-second cooldown, and it can only bring back a single ally when used. This does take some getting used to but it’s a really smart change. 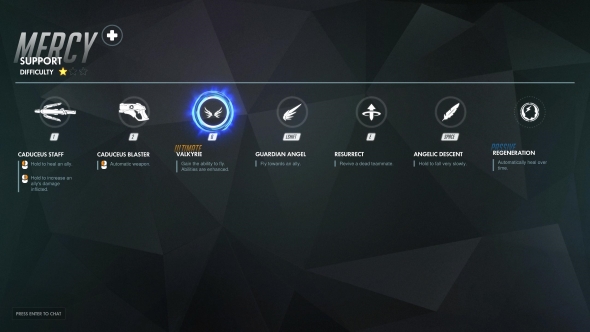 With old Mercy, a single dead ally was a dilemma: do you pop your ultimate now and bring them back into the fight, or do you wait for even more people to die to make sure your ult is ‘worth it’ (risking the potential of dying yourself and screwing it all up)? With new Mercy, a solo casualty can be resurrected on sight without pause for thought. If you enjoy the tactics behind resurrections, multiple corpses now provide that: who is the most valuable right now? Picking the right person to bring back, and then winning the fight, feels like a genuine triumph.

The new system feels much fairer to play against, too. It’s not a good feeling at all to have worked together as a team to coordinate a team wipe, only to have that thrown back in your face by a Mercy player who’s been saving their ultimate for half the match. Cheap victories are a poison and deserve all the culling they get. What’s more, a talented Mercy can still flip the tables on a team wipe situation.

So far, my only issue with the new ressurection system is that the range on it is incredibly short; a mere five meters. You have to be practically dancing on their body before you can trigger it, which feels very strange after being used to the huge area-of-effect on the old ultimate. Merely seeing the glowing remains of a team member is no longer enough, you really need to dive in there. 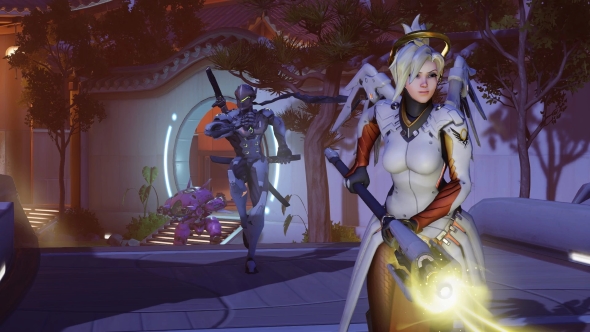 But that’s what I feel this rework is all about: getting stuck in. I’ve always been a fan of playing a Mercy that zips around like an annoying fly, constantly topping up health bars and ensuring no one drops below about 60%. Many Mercy players I see take the hide-and-sneak approach, staying hidden from sight so they can pop a sneaky ultimate just as a Mei has destroyed five allies in a blizzard. I’ve personally never seen the fun in that. Get out there with your allies; that pesky Mei won’t be a problem if your buddies are healthy enough to take her out.

That’s why Valkyrie, Mercy’s new ultimate ability, is so exciting. When activated, you get 20 seconds of being a superhero. You can fly – complete with gorgeous, glowing wings – and quickly soar across the battlefield. Your staff’s healing beam chains from one ally to the next, allowing you to perform incredible group heals. Activating it immediately resets your cooldowns, too, so resurrect is ready immediately. Resurrect has also been reduced to a ten-second cooldown, so if you combo E, Q, E, wait, and E, you can revive three players in just over ten seconds. Like I said before, a talented Mercy can help a team overcome a particularly nasty team wipe.

Yes, it’s not the table-flip ‘screw you’ to the other team that Mercy’s previous resurrection was, but it is simply more /fun/. You can keep more people in the fight, you can bring the right characters back from the brink, and you can pretty much fly a loop-the-loop to stay out of danger. That altitude gives you an amazing overview of the battle, too, allowing you to keep a keen eye on who needs medical attention. 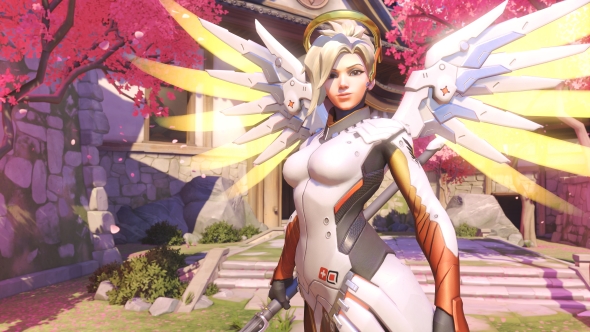 It’s not just about healing, though. While in Valkyrie mode, Mercy’s blaster does significantly more damage and doesn’t require reloading. This means you can hurl yourself into battle and become a real threat to the enemy. The feeling is wonderful. Mercy has always been a bit of a single-trick character, in direct opposition to her fellow healers Lucio, Zenyatta, and Ana. While that trio all have combat options, Mercy has always felt like she was on the back foot when using her blaster. The swap from staff to gun was slow, too, robbing you of any speedy retaliations. But this rework finally makes her weapon truly viable.

What it doesn’t do, however, is turn her into a DPS character. In the immediate backlash on Twitter, Tumblr, and Reddit, some fans have been crying out that the rework has turned Mercy into an offensive healer – a move that would force Overwatch to feel like every other FPS. These fears are, thankfully, unfounded: moment to moment, Mercy is still a core healer. Her gun is only improved when Valkyrie is active; for the majority of the match, you’ll still be focused on healing and buffing. What the rework does mean is, should there be need for it, Mercy can become a very useful damage dealer for a brief 20 seconds. That sounds like nothing but an exceptional bonus to me.

The best thing about the rework is how it simply makes your general moment-to-moment play far more kinetic and engaging. No longer are you just holding down left mouse to heal; you now have much more agency on the battlefield. You’re constantly flittering between targets with your Guardian Angel glide, and punctuating combat encounters with revives. You can bring the dead back to life with significantly more frequency than before, which helps alter the entire flow of battle. And rather than your ultimate being a single air-punch moment, it’s 20 seconds of joyful – almost excessive – healing efficiency and/or death. I’ve always loved playing Mercy, but the matches I’ve played with her rebuild are some of the most engaging I’ve ever had with her yet.

I know change is hard but you should trust Blizzard on this one. It’s not the radical mix up you think it is – Mercy still plays and feels like Mercy – but the changes are without a doubt an exceptional improvement. Go try her out on the PTR; I promise you everything is going to be ok.