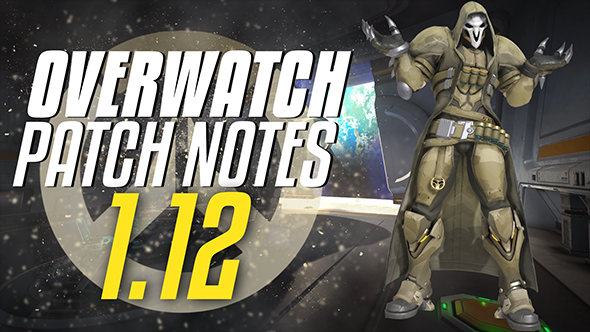 Patch 1.12 for Overwatch is now live. It’s got buffs and tweaks, as well as an entire new map, Horizon Lunar Colony. All the details are below.

For what we know about the future of Overwatch, check our dedicated updates post.

Developer Comments:“McCree’s ultimate can deal a lot of damage if it has a lot of time to build up, but it was often too difficult to get even a small amount of damage out before being stopped or killed. These changes make it more flexible and powerful.”

Old Jesse is still suffering from nerfs deployed at the start of the game’s life cycle that turned him from hip-shooting sniper to a less useful mid-range specialist. He can still one-shot people with his flashbang combo and good aim will pay off – maybe a change to his ult is what will increase his viability.

Developer Comments:“Reaper’s old healing passive was useful if you could kill a bunch of enemies in a row. But since enemies needed to be dead for it to work, it wasn’t very helpful unless the situation was already in your favor. His new passive lets him get immediate benefit from it, especially when fighting Tank heroes, which tend to be larger targets that deal lower damage.”

Make no mistake – this is a humongous buff. The edgiest Overwatch character was always strong in 1v1s but now they should be essentially unlosable at any close range. It will also change how his shift can be used, making it a viable engagement tool rather than a much-needed escape option. Even his ult improves from this, making it more viable against large targets, even if he is still incredibly vulnerable to crowd control.

Developer Comments:“Roadhog’s head was abnormally large compared to similarly-sized characters, so we’re reducing its size to increase his survivability. The Scrap Gun changes reduce the power of his hook combo and alternate fire burst damage potential while still keeping his DPS roughly the same.”

This one is much more controversial. You can see a comparison of firing speeds hereand a summary of reactions here. While the changes are healthy for the game (a one-shot character just wasn’t ever going to stay viable for long), they remove a lot of Roadhog’s signature power. The right click is a lot more fun now, but he’ll take some getting used to.

Head back to Winston’s home on the moon in the new Assault map, digging into the hero’s lore history as you fight across the colony. Here’s a quick look at it and a flythrough, with some of the map’s goodies:

Principal level designer Dave Adams mentioned on the forums that various changes are on the way. They will be closing up some sightlinesand fixing some tires on point A. They’re also keeping an eye on map balance in general and various bugs.

Oni Genji and Officer D.Va have been added to classic loot boxes, making them available on console and to players who didn’t feel like getting involved in Heroes of the Storm.

“Also, the old statistics were calculated by taking total damage inflicted and dividing it by the number of games played. This resulted in an average that didn’t accurately reflect the underlying performance, because it didn’t take into account the length of the games. The new averages are calculated in 10-minute slices.”

Kaplan offered an explanation as to the removal of the Rate This Match feature – essentially, it wasn’t teaching Blizzard anything, and they’d rather have a clean UI.

Of note, a small bug fix patch was deployed on June 7 with various changes.