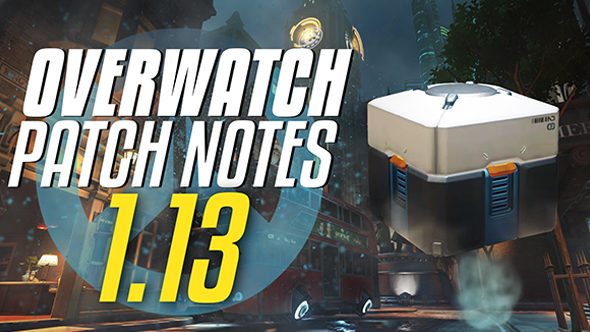 Overwatch reaches patch 1.13 soon as it’s now on PTR. It brings with it changes to loot boxes, highlights, and Doomfist. It should also line up with the Summer Games event returning. See what we know so far below.

Here’s what you can expect out of the next Overwatch patch, 1.14.

We don’t know about you, but having fewer duplicates in Loot Boxes sounds pretty good to us. We’re also into the idea of being able to save and easily share highlight videos. In 4K too! Here’s what we know:

The PTR phase is over – here’s how the heroes look at the end of it all.

Doomfist has finally been unveiled, added to the Overwatch PTR today, July 6. The hero is a speedy Offensive character built for getting in, dealing damage, and getting out again. He can also punch folk into walls, so that’s nice. For a rundown of his abilities, check out our dedicated Doomfist abilities post.

The new Brawl is a 6v6, Doomfist-only match with no respawns. Keep your guard up, clench your fists, and keep an eye on the skies.

Developer comments:Loot Boxes will now give out drastically fewer duplicates, so you should be able to unlock stuff for your favourite characters more easily. If you’re worried about taking a hit in Credits, Blizzard are also upping the Credits earned from Loot Boxes, so you should earn around the same, if not more, under the new system. Of course, the PTR exists to tweak how it works.

With that in mind, all players who log in to the PTR this patch cycle will receive five PTR Loot Boxes. These are standard loot boxes that will only be available on the PTR. Any items earned from Loot Boxes or unlocked via Credits on the PTR will not transfer over to your live account.

We’ve done some of our own research, which you can see above. This looks like everything the casual community was asking for regarding improved loot boxes, and should make the next event much less of a complaint zone.

Essentially, the close-to-no-duplicates claim translates to if there is an item in a dropped rarity that you don’t have, you will get it. So you open a box with two commons and two rares, but you own all but one common, you’ll get one duplicate common and the rest will be new. For the vast majority of players, it should mean no duplicates at all, and happy smiles all round.

For some interesting context, on the same day that these changes were announced, Hearthstone’s devs said they were changing card packs to never give you duplicate legendaries. They’re also guaranteeing legendaries within the first ten packs of a new set – something Blizzard could bring to Overwatch.

While the power of things like Shadowplay and Twitch clipping means a lot of this functionality was available to PC players anyway, these are nice QOL changes, particularly for those running on less-uber setups. Since the initial post, there’s been two major updates, one adding more options for exporting videos and the other allowing you to change the save location.

If these changes don’t fill you with joy, there was a lot of tech riding on them being in place. Replays should now be possible as an expansion of the highlight system, for example. Improvements to highlights themselves should also be next on the block if possible – double hero POTGs, for example.

People have been assuming that Summer Games will return, as it has been hinted at for a long time and is present in various datamined files. However, it’s not live so it must be coming further down the line – perhaps Blizzard will show it at Gamescom.