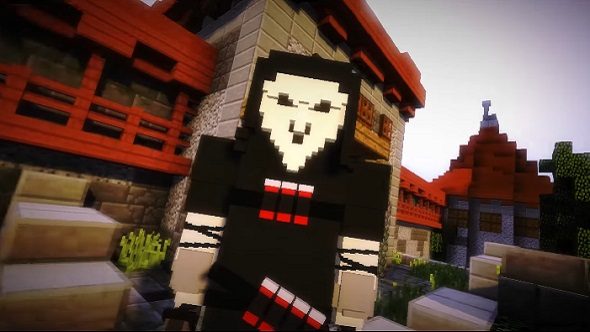 For more Minecraft mods, check out our list of the very best.

This isn’t just a skin though, this special command block build turns a player into a blockier version of Reaper, complete with all of his abilities and dual shotguns. His Minecraft shotguns do not fire multiple projectiles unfortunately, but they pack enough of a punch to kill a Creeper in just two shots.

Reaper’s Wraith Form is still intact, with players briefly turning invisible and gaining increased resistances as they float about. His Shadowstep teleport was the most difficult ability to recreate says McMakestein, as it involves dropping invisible armour stands from the sky to determine the teleport’s position and then swapping the player character with the falling stand. This does mean that you cannot use Shadowstep indoors, but you can overlook that when McMakestein was able to make the ability work with only two commands.

If you want to lay waste to an entire room of spiders or skeletons, Reaper’s Death Blossom is still available. This build even includes Reaper shouting “Die! Die! Die!” as he pirouettes along the ground. You’ll still have to charge the Ultimate meter in order to activate Death Blossom, so don’t expect bullet spirals on tap.

Members of the Overwatch team have chimed in on this build, with lead software engineer Bill Warnecke calling it “super rad.” It is not the first Overwatch character McMakestein has recreated mind you, as his previous videos also show him making Tracer, Genji and Lucio in Minecraft.

In total, the project took about a month to make, with McMakestein spending about two weeks on the custom models, another week just for the code and then a final four days to make the video. If you want to try out Reaper for yourself, you can download the build right here.