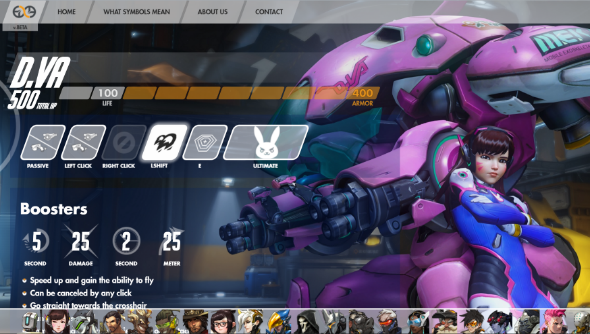 Just over 24 hours until Blizzard lets us all back into the playground of heroes, a site has appeared to make your return that little bit more informed.

The French site, BornToFight, has collated all the numbers from a Google Sheet full of character damage values into an easily navigable and elegantly presented resource.

Pierre Tusseau, a french web designer, created the site to give a graphical representation of the mess of numbers behind Overwatch’s otherwise pretty facade.

Choosing any character brings you to a page detailing each of their abilities and gives statistics about them. Some are simple such as how much damage they deal per second, and the ability cooldown, but others are more complex like how much of your Ultimate charge they provide if they do damage.

Other bits of info, such as Symmetra’s mini-sentries stacking slows, or her main fire doing more damage the longer it’s attached to an opponent, aren’t explained well in in-game tooltips.

Additional damage modifiers, such as primary fire with fall-off over distance and ability to crit, are signified by a series of nicely designed motifs for each damage type.

Overall it’s just a great way of showing the depth the game has while keeping to the simple approachability Overwatch’s aesthetic provides.

So if you need to brush up on your homework before the big day, go and get learning, recruit.