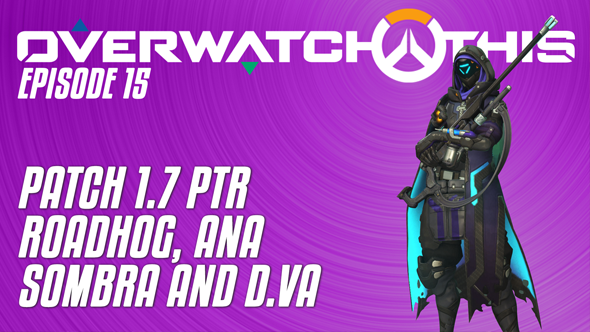 Hooking you by the eyeballs and yanking you into view, Overwatch This episode 15 has just gone live on the YouTubes, delivering you your weekly slice of hot Overwatch action staight into your brain bits.

Our archive of Overwatch updates is a great resource if you’re wondering about the future of Blizzard’s shooter.

This week we’re talking about all the big hero changes that are currently live in the PTR, from Roadhog’s hook to Ana’s biotic grenade.

We spoke about the hook last episode, but it’s being tweaked and refined in the PTR currently, making it so it can’t whip people off a cliff and ensuring players being hooked can’t just sidestep behind cover. It’s definitely a nerf, but Roadhog should be more consistent when it’s finalised.

Then there’s Ana, who is still just as viable, but her biotic grenade’s effectiveness being halved should stop her being such a force of nature.

Elsewhere, D’Va’s nerf has left her feeling a bit like a spare part. Where before she was a flanking tank, she’s now nowhere near as viable in guerrilla situations, as she’s not as armoured up.

Watch us discuss all that and more in the video embedded above.