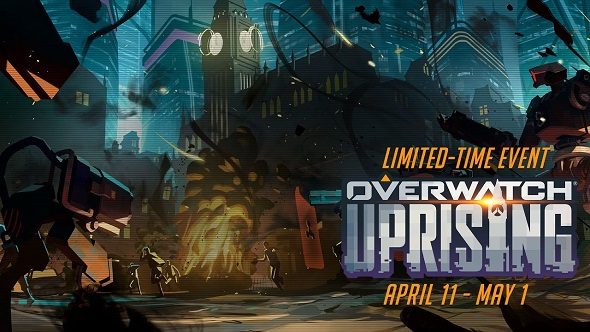 Overwatch’s new event is live now and it’s actually called Uprising, not Insurrection as it was called in the French trailer leak. Bloody localisation. Anyway, Blizzard have quite helpfully released images of the skins, as well as clips of the emotes and victory poses.

If you want to know what lies ahead for Blizzard’s FPS, check our article on Overwatch updates.

Overwatch Uprising allows us all the revisit a pivotal moment in Overwatch history, letting us relive the heroes’ formative years as they battle omnics in King’s Row.

For our efforts, we’ll get special Uprising Loot Boxes filled with new skins, highlights, emotes, and sprays. The loot and the event will only be around until May 1, however.

Head seven years into the past and fight omnics in King’s Row as a team of four in co-op vs AI. Scrap Null Sector robots as Tracer, Torbjörn, Reinhardt, or Mercy, working as a team against waves of metal foes. You have Morrison-era Soldier: 76 and Ana Amari giving you orders over comms, so the mode is a must-play for anyone with an interest in Overwatch lore.

Blizzard have also added in another Arcade card to allow players to play the Uprising Brawl as any of the 24 Overwatch heroes available. It’s not lore-friendly, but it sounds like the perfect thing to play once you’re done with the main event. Both games come with their own sets of achievements.

Here’s a quick look at what’s on offer in the limited-time event.

A new animated short has released, detailing the events leading up to the new Uprising co-op mode that’s now live in the Arcade. Get a look at Null Sector and the fall of King’s Row above.

Listen to “Jeff [daddy Kaplan] from the Overwatch team” talk us through all the new additions in the Uprising event, including game modes, lore, and loot.

There are ten new skins in total for the Overwatch Uprising event, putting all your favourite heroes back in their original garb. Have a look below: