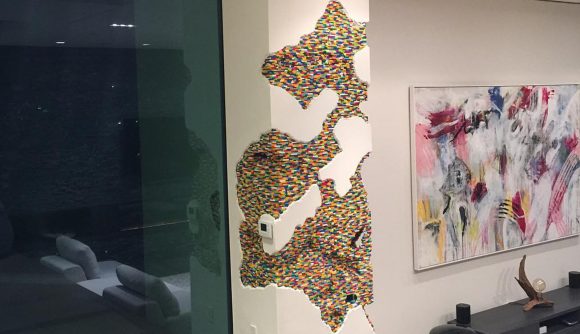 I don’t know about all my fellow nerds at heart, but I for one maintain my childhood dream of covering a home with ridiculous Lego constructions. Russian-German music producer and DJ Zedd has gone a step further – he’s gotten a corner of his house rebuilt in Lego, complete with hidden dioramas of various scenes nestled behind hinged panels.

Zedd’s got a video on Twitter touring the installation, which features a recreation of the Omnia nightclub in Las Vegas, an alien abduction scene, and a woodland paradise. The highlight for us, of course, is an Overwatch scene that faithfully recreates point two of Hanamura, as a predictably pitched battle with D.va, Tracer, and Bastion takes place.

The project comes courtesy of artist Dante Dentoni, whose Instagram showcases plenty more instances of putting Lego constructions in unusual places. Who knew bricks had such a place in architecture? Er, plastic bricks, anyway. I scarcely want to consider the cost of having a professional artist replace a corner of my house with Lego sets, but oh man it’s so cool.

Check out the tour directly for yourself below.

In love with this new art installation at my house by Dante Dentoni!!!! 😍
He replaced a part of my wall with LEGOs and built in a bunch of little hidden rooms, including @OmniaLasVegas, an @PlayOverwatch room (Hanamura pt. 2), an alien abduction world and much more pic.twitter.com/8Juaz2qgN6

If all this has you hankering for Overwatch Lego, you’ve got official options – the first few official sets finally launched last year.

Elsewhere in the Overwatch world, Blizzard’s latest short story has seen Soldier: 76 come out as gay. Truly, it’s a banner day for Blizzard’s hero shooter, and we’re on track for an incredibly colourful 2019.