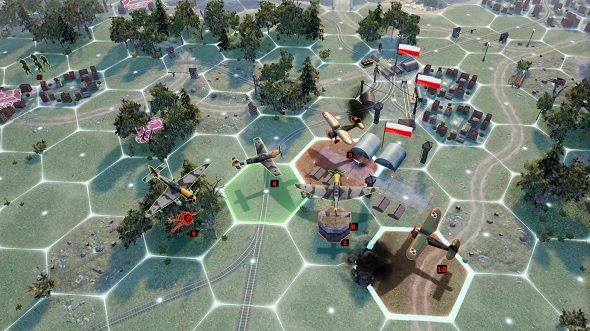 If you’re into World War II and tank games but the upcoming Battlefield V is far too down in the mud for you to even consider playing then you should check out Panzer Strategy. It’s a turn-based wargame that gives you the perspective of a military general – if that general was hovering above the battleground at 500 feet high, that is.

It’s classic in its design through and through – not just in its perspective, but also because it divides the battleground into hexagons, and has proper turn-based gameplay. But don’t get Panzer Strategy wrong. While it does hearken back to the roots of the genre it doesn’t do so without being kitted out with a modern look, afforded by the luxuries of Unreal Engine 4, no less.

If you’re after more freebies then here are the best free PC games.

The biggest selling point of Panzer Strategy, however, is that the goal of developer Starni Games is to provide “the most flexible strategy gameplay in the genre.” How? Hundreds of customisable units, commanders with unique abilities, and lots of attachments and skills you can assign to each unit. Sound good?

You’ll also need to ensure that your supply lines are properly managed. This is an area that many historical strategy games forget. But in Panzer Strategy you’ll need to expand your supply system alongside your growing army so that it has all the ammo and fuel it needs. If you don’t then your tanks won’t shoot and your men won’t march.

Panzer Strategy is currently on Steam Early Access where the developer is hoping to get feedback to ensure its goal of having a flexible strategy game satisfies you. If you think you can help out then you’ll want to pick the game up on Steam.

But we’re not just here to tell you about Panzer Strategy as we also have 50 Steam keys for Panzer Strategy to give away. If you want to win one then you need to enter the competition via the widget below. Every action you complete is worth one entry into the giveaway, with the more actions you complete increasing your chances of winning.

We’ll also need your email address so we can send you a code upon winning – we won’t send you spam, we promise. Please read ourterms and conditionsbefore you enter.