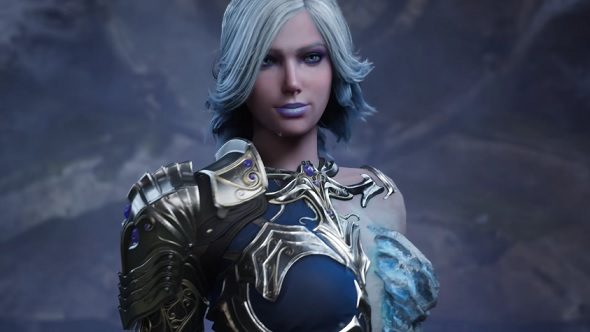 Keeping to their cycle of new characters for 2017, Epic Games have announced the latest hero that will soon be joining the Paragon roster. It’s a change of temperature from the devilish Serath, as new hero Aurora is one cool customer, having command over ice and frost.

If you’re still on the hunt for the MOBA for you, have a gander at our MOBA guide.

Aurora is a crowd control specialist, using her mastery of the cold to freeze enemies in place and change the pace of a team fight. A fantastic initiator, a skilful Aurora can lock opponents down with her chilling abilities, allowing her allies to mop up the stragglers.

Her right mouse click is Frozen Simulacrum, a targeted leap attack which see her leaving behind an ice clone as she leaps towards opponents. Her Q, Glacial Charge, has Aurora sliding forwards on a icy trail which blocks incoming projectiles and knocks opponents out of the way. Her E summons a ring of hoarfrost that roots enemies caught in its grasp and her R is Cryoseism, an ice earthquake which freezes all opponents on hit. Once turned to ice, the frozen players will then explode, dealing damage and slowing any others caught in the icy blast.

The cold clearly doesn’t bother this ice queen, as she looks an absolute terror to squishy Rangers who get caught out in the cold. Wrap up warm and break out the anti-freeze if you see an Aurora sliding towards you.

Like with all Paragon heroes, Aurora is free to play and will be accessible to all players once she launches on January 31.