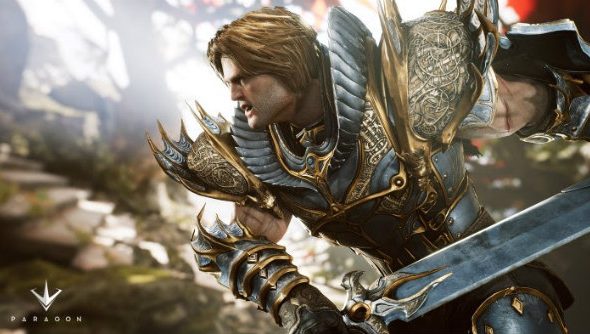 Paragon’s new hero, Greystone, is a powerful swordsman who excels on the frontline, so stack him up with damage and wade in swinging.

Looking to the future? Here’s a list of all the upcoming PC games.

Greystone’s base melee attack is formidable enough, but he can also summon a vortex of stabby pain to circle around him, meaning he’ll do mega damage when he’s right in the midst of it all.

Another ability, Assualt the Gates, sees Greystone fly into the air and crash down with his sword. This can be used to chase down fleeing targets, to quickly engage or disengage, or even to traverse terrain.

The hero’s ultimate, Reforged, will have him turn to stone upon death, only to instantly respawn by crashing through the sky and landing with a fiery blast that deals massive area damage.

Here’s a video showing off his skills:

As always, all heroes in Paragon are free, with a new character being added every three weeks. Paragon is now available in paid Early Access, and will be in free open beta starting on August 16.