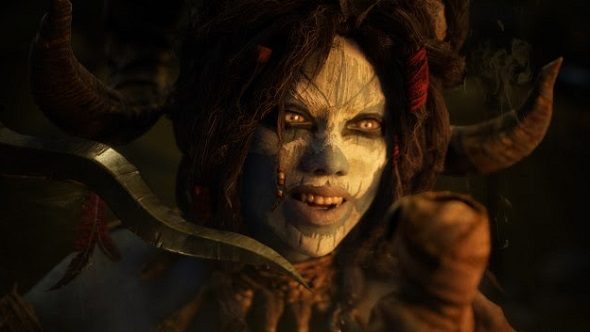 Flyswatters and bug zappers at the ready, as the queen of the bugs Morigesh comes to Paragon next Tuesday. The physical embodiment of a drowned forest, Morgiesh uses her command of insects to swarm over the enemy team, inflicting consistent damage before finally assassinating her foe.

Find out the MOBA that’s right for you with our helpful MOBA guide.

Much like a mosquito looking for blood, Morigesh’s role is to harass the enemy team with constant pokes at close range. Upon marking a target for death, this forest spectre’s job is to chip away at the opponent’s health, until she can deliver the final blow with her killing curse. As such, people playing Morigesh should focus on buying cards that increase damage and mana.

Morigesh’s RMB is Mark, where she marks a target by stabbing a voodoo doll. This mark stays on an enemy until Morigesh changes her target, she dies or the enemy dies. The mark is linked to Morigesh’s Ultimate called Curse, where she summons a deadly cloud of bugs in her image. This is a global Ultimate, with this insectoid clone of Morigesh appearing over the marked target and stabbing them with a giant knife. If you’re marked, you cannot run from this spirit’s wrath.

Her Q is Hive, with Morigesh throwing an insect hive at the enemy and dealing AoE damage. Enemies are slowed for every tick of damage taken while standing in the hive, giving Morigesh time to close the gap and finish off her target. This slow lasts even longer if the enemy has been marked. Her E is Swarm, which has her transforming into a writhing mass of bugs which can pass through enemies. Morgiesh gains a movement speed increase in this form, allowing her to deal damage and then slip away. She also gains a burst of health regeneration for every enemy she passes through.

For players looking for a close range assassin, Morigesh might be the vengeful ghoul for you. Otherwise, best bring out the bug spray. As with all Paragon heroes, Morigesh will be free to play when she launches on April 4.