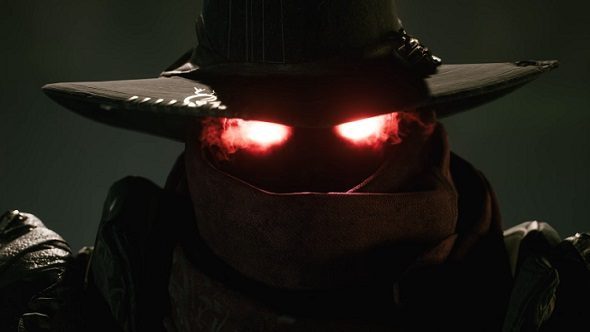 It’s high no..no wait. A melding of malevolent spirit and ruthless bounty hunter, Epic Games have announced the latest hero coming to Paragon. Arriving April 25, Revenant is a ranged carry who excels in isolating opponents and then pumping them full of lead.

Broaden your multiplayer horizons by finding out which MOBA is right for you.

Being half gothic bounty hunter and the other half evil spirit from the Nether Realm, Revenant’s abilities are a mix of powerful gun shots and dark energy blasts. His basic attack has him blasting opponents with his quad-barreled revolver, automatically reloading after his fourth shot. You can manually reload with a click of the right mouse button, which adds some bonus damage to the final shot in the chamber.

His Q is Scar, where Revenant infects opponents with dark energy, causing attacks to deal bonus damage. For more firepower, his E Obliterate has Revenant firing off a quick volley of dark energy projectiles which target random enemies. Be aware that Revenant can’t move when using Obliterate, so be careful about your spacing mid-push.

Finally, Revenant’s R is Reckoning where he pulls a targeted enemy into the Nether Realm for a duel to the death. Only Revenant and his target exist in the Nether Realm, leaving them to fight it out until either one of them falls or the timer runs down. If Revenant manages to win this otherworldly standoff, he is rewarded with extra card power.

For players who love singling out enemies for death, Revenant will be your guy. As with all heroes, he will be able for free when he joins the Paragon roster on April 25.