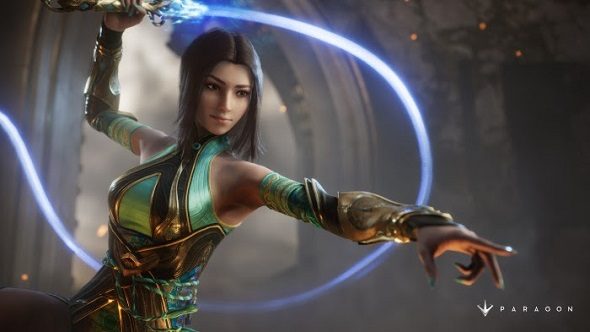 Blowing into Paragon’s character roster on March 14, Epic Games have released a special character overview for new character Yin. A master of the whip and wind magic, Yin is a melee carry uses her stellar mobility and superior range to harass opponents from afar and then close in for the kill.

Find out which MOBA is right for you with our handy guide.

As some of Yin’s abilities have a Cleave effect, it is recommended you buy critical strike and attack cards to further increase Yin’s damage. Her RMB is Backlash, which has Yin cracking her whip and dealing damage at enemies in front of her. If Yin hits an enemy projectile with Backlash, she will actually reflect it back so work on your aim. Her Q is Lash Kick, which sees Yin grappling onto a target and pulling herself in with a flying kick. If you latch onto an enemy, you will naturally do damage but you can also whip to an ally, to quickly provide support or if you need to escape a dangerous situation.

Yin’s E is Windburn, which increases the range of her whip and deals Cleave damage to all enemies hit by her strike. Try and line up enemies when casting Windburn so you can maximize damage. Finally, Yin’s Ultimate is Quelling Gale which has her summoning a huge sphere of wind. Not only does this wind sphere slow any enemies inside it, but it slows any projectiles that enter it to a crawl. With careful placement, you can slow down an enemy’s projectile Ultimate with Quelling Gale and send it flying back at them with Backlash, securing a kill.

Yin will be free to play when she joins the Paragon roster on March 14.