The Path of Exile Blight release date is fast approaching, and that means another league, sweeping quality of life improvements, and – of course – some sweet loot to grind for between next month and December. This new PoE league is inspired by the tower defence genre, and involves placing down structures to aid you in battle: think of them as sentient medieval turrets. You’ll be looking to destroy the blights that have appeared in Wraeclast, mainly because they control the minds of nearby minions. Do so, and you’ll earn the means to upgrade a new set of gear.

That’s not all that’s happening though, as Grinding Gear Games has also buffed some PoE builds to make them more viable again. If you’re a fan of the necromancer, poison assassin, or the mine saboteur, you’re in for a good time.

Anyway, enough from us. Throughout this guide, we’ll go through all things PoE Blight, from the release date to the new gear you can get and how you can update it. We’ll also go over minor quality of life updates like the reworked master quest system from the Atlas of Worlds endgame, and how older leagues are being brought back into the fold.

Thankfully, we don’t have to wait for long to get our hands on this expansion. The Path of Exile Blight release date is September 6, 2019, on PC. After that, it’ll come to PS4 and Xbox One on September 9.

Blight won’t be around forever though – it’ll be gone come December. As for what’s happening in the next Path of Exile expansion, we’ll get all the details during ExileCon on November 16, 2019. 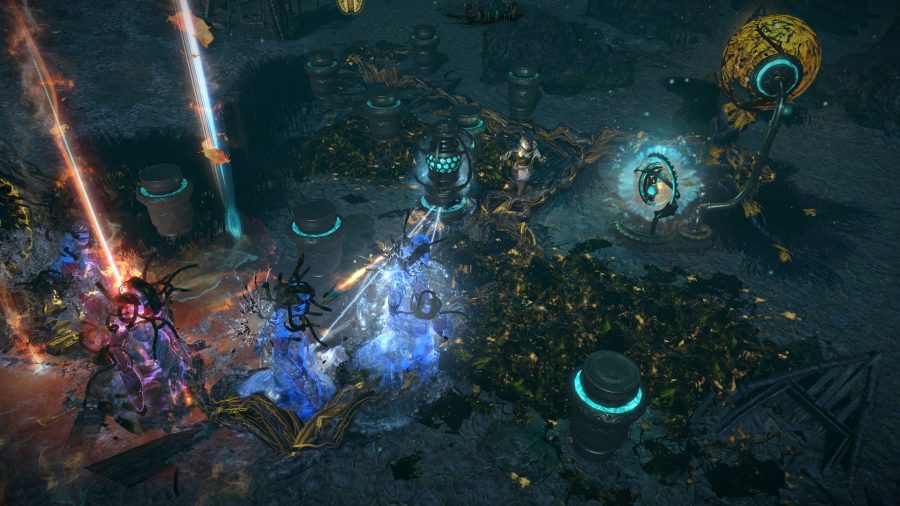 When Blight commences, you’ll meet a new NPC called Sister Cassia. As the story goes, fungal growths have spread throughout Wraeclast, controlling the minds of nearby monsters. Sister Cassia has built a device that can drain the ichor from the growths, but she needs you to defend it from infected horrors while it operates.

You’ll find a blight in each area of Wraeclast, and this encounter plays out like a small tower defence game. The fight starts when you attack one of the blights, as they’ll command infected monsters to defend it. These creatures will mindlessly follow the blight’s tendrils, and will only harm those in their path. The infected are quite tough, which is why you’ll want to build towers to exploit each monster’s weakness. Defend a tendril lane successfully, and a chest will appear with rewards.

You can place different types of towers – some slow monsters down, others buff different towers. You can also put them in various locations to maximise their effect against the onrushing, zombified horde. All of this plays into the strategy element of Blight, as you react to the type of minions you come across to best achieve victory.

Blight also has an endgame, which is accessed through Blighted Maps. You can use these in the map device just like any regular map item. Blighted Maps will take you to a warped version of that area that contains a juiced-up Blight encounter. Essentially, everything is harder, and there are no regular monsters. The benefit, as you can imagine, is items unique to the league. 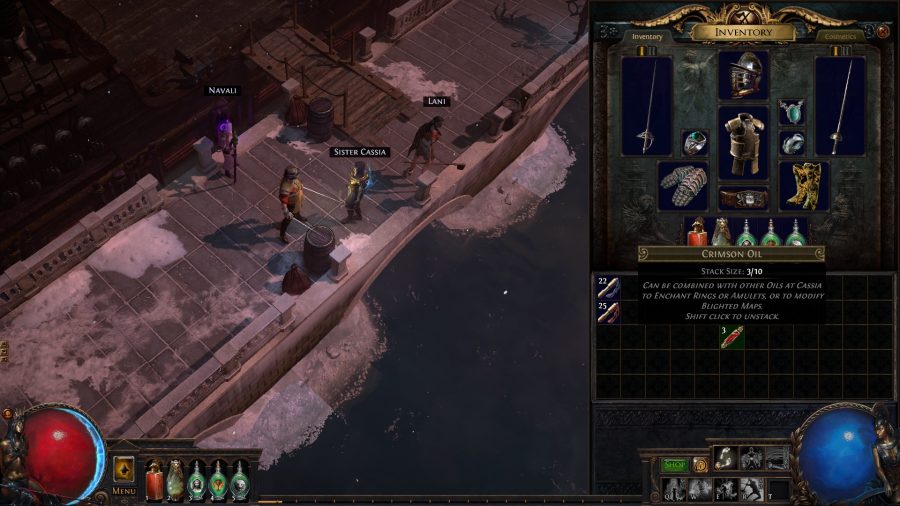 One of the new reward items you’ll snag here is oil, which can be combined to add properties to items. To do so, all you need to do is go to Sister Cassia and use a combination of them to anoint unique pieces, rings, or amulets. Different combinations yield different results, though the order doesn’t matter. There are 12 tiers of oil in total that ascend in rarity. Three oils of one type can be combined at the vendor to upgrade it to the next level.

Sister Cassia can combine two oils to anoint a ring, adding an enchantment that alters the functionality of your towers. As you can have two rings equipped at any given moment, you can specialise your tower defence in two different ways and stack buffs as you see fit. 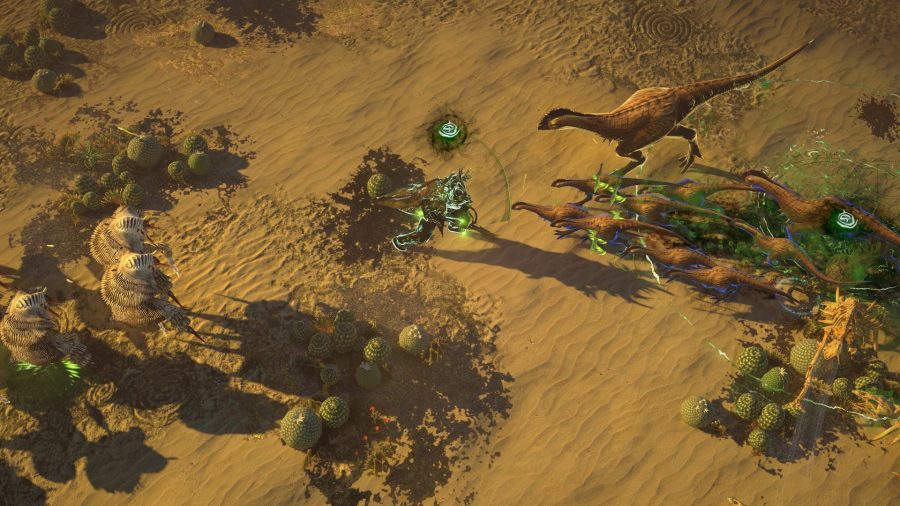 Grinding Gear Games’ has also been working on buffing some previous class archetypes.

One of the main tweaks to this build allows you to control the behaviour of your minions through three support gems. Gems will affect their temperament by making them act aggressively, defensively, or by making them single out a specific target. You’ll also find a new type of golem, called the Carrion Golem, that buffs and is buffed by other minions.

One that older Path of Exile fans will remember, Grinding Gear is looking to bring the poison assassin back into the meta with some additions. Five new skills have been added alongside a shiny, new support gem that adds options to the poison assassin archetype. One example of a new ability is the Cobra Lash, which throws out a copy of your weapon that chain hits multiple enemies – it is also guaranteed to poison your foes.

You can also get a new buff from the ascendancy tree called Elusive. The buff provides defence and mobility for a limited time, and after it expires, the buff diminishes gradually rather than stopping instantly.

An ascendancy option for the shadow class, the saboteur, is set for a buff to its mines. The explosives can now be thrown at range, are faster to deploy, detonate in sequence, and will reward you if you manage to blast a long sequence of them.

Path of Exile changes to Atlas of Worlds master quests

Grinding Gear Games has sought to make Path of Exile’s endgame friendlier to players who may be strapped for time. Previously, players could encounter any of the five masters at any given moment and be tasked with doing rewarding but challenging missions. As Grinding Gear Games puts it, this was problematic as players felt that they had to engage with a lengthy mission then and there – leaving a potential friend they were playing with behind.

Now, however, the majority of encounters with masters are deferred. A new counter shows how many missions of each difficulty you have available. While you can still bump into a master organically, you can also speak to them in your hideout at any time. You can also give them the map you’d like the unique mission to apply to – as opposed to the old system where it was random. 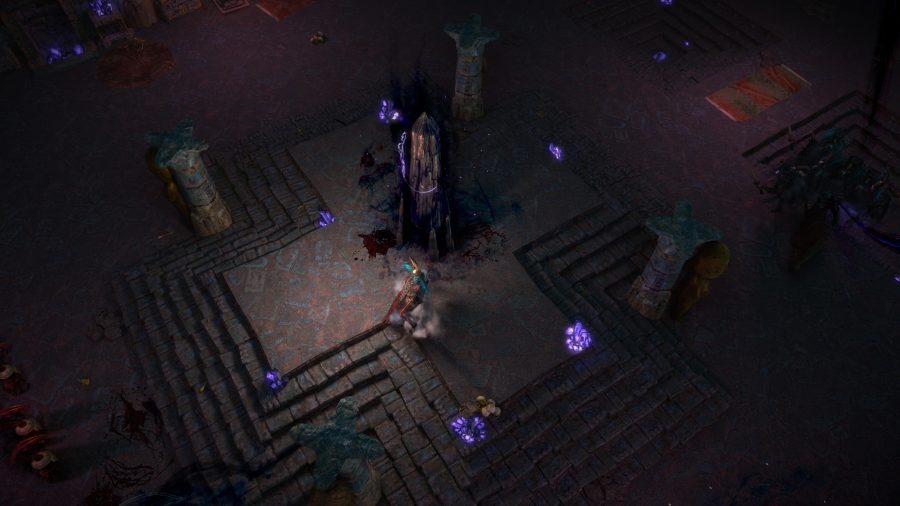 The Blight expansion also contains some tweaks to leagues of yore. Namely, For the Betrayal and Delve challenge leagues. The tweaks to these are:

Blight is also introducing some new leagues into the mix. Once the Path of Exile Blight launch date comes about, you’ll also get to play versions of Legion and Synthesis.

And there you have it, folks, that’s everything you can expect when the Path of Exile Blight release date hits. The tower defence inspired gameplay is a neat twist on PoE combat, and Grinding Gear Games’ has a decent track record with taking outside influences and turning them into quality leagues – look at the Bestiary league.

For fans of character builds, there should be plenty more to think about. We also have more old leagues to, ahem, delve into. All this should tide us over – well, until December.