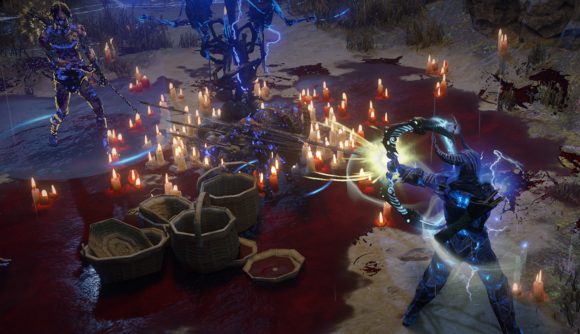 Path of Exile‘s 3.13 expansion, Echoes of the Atlas, went live last week, and it’s safe to say the new release is a hit. The player count jumped about ten times higher on launch day, and brought the game to a new all-time concurrent player record just a few hours after release, as a total of 265,250 people hopped into the game all at once.

That 265,250 peak is 11% higher than the previous record of 237,160, according to developer Grinding Gear Games. The official peak is quite a bit higher than the 157,103 Steam players noted on public data trackers like SteamDB – Path of Exile is also available outside of Valve’s platform, so it looks like around 60% of players came from Steam.

The new player counts have led to some server issues, though the studio says these “are almost entirely fixed”, and they’re already working on improved capacity for launches in the future. The devs have launched a total of six hotfixes on PC, addressing a variety of bugs, crashes, and gameplay issues.

A larger patch addressing bigger issues is set to be deployed sometime this week.

Our #EchoesOfTheAtlas✨expansion has been live for almost five hours and we achieved a new peak in concurrent players (265,250 which is up 11% on our previous record of 237,160)! 🔥Thanks so much for joining us!

As we continue our long wait for the Diablo 4 release date, POE’s take on traditional loot-slashing is all the more appreciated.