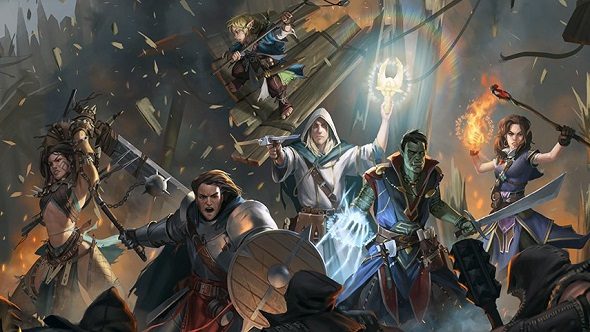 Chris Avellone, the writer on some little-known games like Fallout: New Vegas, Knights of the Old Republic 2, Planescape: Torment, Pillars of Eternity and many others, is helping to create the first-ever isometric CRPG set in the Pathfinder universe. Joining up with a new studio called Owlcat Games, the game is titled Pathfinder: Kingmaker.

For more epic adventures, check out our list of the best PC RPGs.

Set in the Stolen Lands, “the dangerous and turbulent territories well known within Pathfinder fandom”, Pathfinder: Kingmaker sees players trying to establish their own kingdom. As you build and expand your territory, fledgling kings and queens will have to combat rival lands and threats from the wilderness. Your kingdom will grow based on your “alignment, choices, allies and the hero’s ability to lead his or her people”, according to Owlcat. Expect a ruthless tyrant to create a city of cold stone, while a benevolent person of the people will build a thriving market town.

If you aren’t familiar of Pathfinder, it’s a tabletop RPG built off the Dungeons and Dragons 3.5 ruleset. First published by Paizo in 2009, it has been polished and improved, thanks to constant player feedback since its initial release. As it is using the expansive Pathfinder ruleset, there will be plenty of room to customise you and your party members in order to create a group “capable of overcoming insurmountable challenges.”

With Avellone on the project, expect a pool of well-fleshed out characters to join your inner circle, with each one having their own backstory for players to explore during their reign. “I’m excited by the prospect of bringing Pathfinder to the computer RPG world, and hope gamers will enjoy playing in the Pathfinder universe,” says Avellone and with Owlcat comprising of fellow RPG veterans, expect quite the old-school experience.

It will be a long time before the release of Pathfinder: Kingmaker, but expect more information at this year’s PaizoCon, which runs from May 26-29.