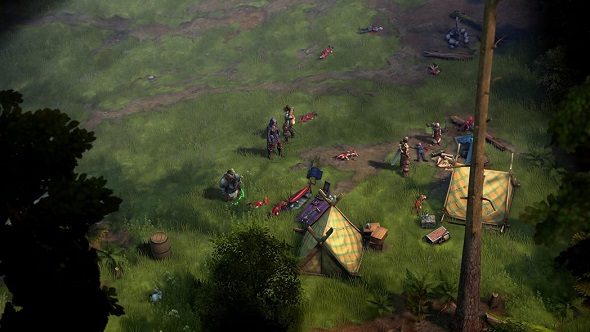 There’s an RPG adaptation of the Pathfinder tabletop games coming, with notorious videogames writer Chris Avellone lending some weight to the Kickstarter pitch. It’s a tactic that seems to have worked, too, since it’s now been fully funded.

There’s still 15 days to go and the project has smashed its $500k funding goal, so naturally it’s time for stretch goals. The first of these is camping.

Camping here won’t be a case of just passing the night, however. In Pathfinder: Kingmaker, you’ll need to send hunters out to gather supplies and you’ll need to set someone to stand watch lest monsters or bandits attack. The world doesn’t stop just because you do. You’ll get that at $550k.

Following that, at $600k, there’s a new class: the Magus. It’s a mage with added ‘us’ – a magus. A melee mage. They’ll batter you with spells, basically. Think of this class as a deadly, magic samurai, capable of graceful blade dancing, all while simultaneously showing off with pyrotechnics.

As for what comes after all that, here’s what the devs say: “Future stretch goals will add archetypes (for all the classes), additional race choices, storyline expansions beyond the initial Adventure Path and more companions, (including a companion that’s dear to hearts of Pathfinder fans). Owlcat Games also wants to include more locations to visit, including an epic dungeon.”

Head to the Pathfinder: Kingmaker Kickstarter page if you want to contribute.