The unending cycle of PCI Express standards continues, with work beginning on PCIe 6.0 as we speak. The sixth iteration of the interface will offer up to 64 GT/s bandwidth from a 16x link, and the specification will be finalised by 2021 – although we won’t see product on the shelves until much later.

Each standard doubles the capability of the last, with PCIe 5.0 set for 32GT/s and PCIe 6.0 just announced with transfer speeds of up to 64GT/s. Unlike USB’s governing body, USB-IF, PCI-SIG sticks to its naming conventions, which makes all of this relatively straightforward… for the most part. “Actual” bandwidth, as rated by PCI-SIG, is 128GB/s for PCIe 5.0 and 256GB/s for PCIe 6.0.

PCIe 6.0 will introduced PAM-4 encoding (Pulse Amplitude Modulation with 4 levels), along with FEC (Forward Error Correction) to improve bandwidth efficiency. And, as always, the latest standard will remain backwards compatible with previous generations of PCI Express generations to make chopping and changing your rig a worry-free affair no matter the age of your components.

“Continuing the trend we set with the PCIe 5.0 specification, the PCIe 6.0 specification is on a fast timeline,” Al Yanes, PCI-SIG chairman and president, says. “Due to the continued commitment of our member companies, we are on pace to double the bandwidth yet again in a time frame that will meet industry demand for throughput.” 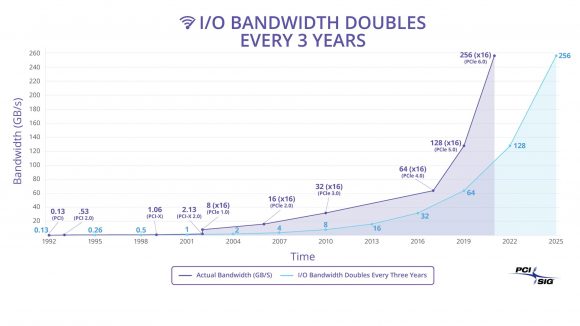 But this new standard is a little above gamers’ pay grades, rather intended for “artificial intelligence, machine learning, networking, communication systems, storage, and high-performance computing.” All that good stuff.

Want more? These are the best gaming mice on the market today

By July gamers will be among the first to experience a complete PCIe 4.0 ecosystem in the form of AMD’s Ryzen 3000 processors, RX 5700-series GPUs, and X570 motherboards. The switch to the new standard won’t make a huge difference to gaming performance, but it will open up the platform to greater numbers of super-fast SSDs and increased I/O connectivity.