Despite the fact that we haven’t actually been back to the Moon since 1972, that hasn’t stopped humanity’s imagination from stretching further. Our own local space is not enough – we must go to Mars!

Sci-fi city/colony builder Per Aspera is one such symptom of this recent fascination with the Red Planet. You play as AMI, an artificial intelligence housed in a command and control satellite above Mars, and your role is to embark upon a decades-long journey to slowly terraform the planet for human habitation. Our own Gina Lees had a mess around with a preview build not so long ago, but it won’t be long before you can try it out for yourself. Per Aspera will be released on PC via Steam and GOG.com on December 3.

The early game is reminiscent of Paradox Interactive’s similar city builder game, Surviving Mars, and much of the start will be about harvesting resources with robot workers and getting the initial colonies set-up so that real people can come live in metal domes. But you’ll always be working towards the eventual end goal of giving the planet a breathable atmosphere, one way or another.

There is a narrative to the game as well, as countless trailers keep teasing. Your game only represents the latest in a long-line of terraforming projects that stretch back hundreds of years. Things aren’t as they seem, and you’d be naïve if you think you can just sit back and balance the books until Mars is converted… although, that’s exactly what you can do if you opt to play the story-less sandbox mode, I guess. 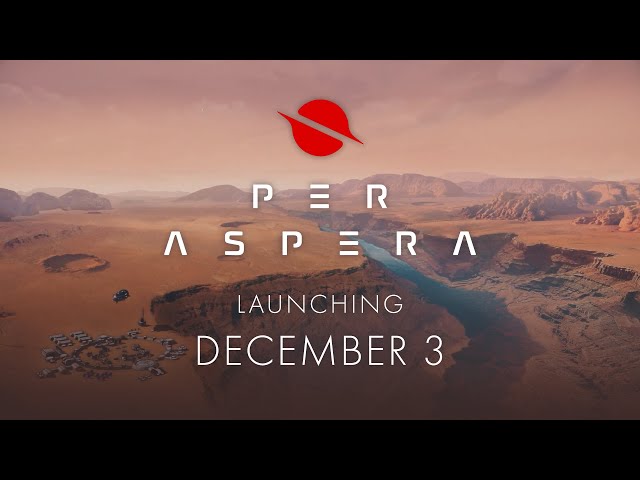 The campaign mode is brought to life thanks to voice acting from the likes of Troy Baker, Phil LaMarr, and Laila Berzins, to name but a few. Steam users have a second chance to check out the demo that ran during the Autumn Game Festival, if you missed it the first time around.

Per Aspera was created by Tlön Industries and published by Raw Fury.