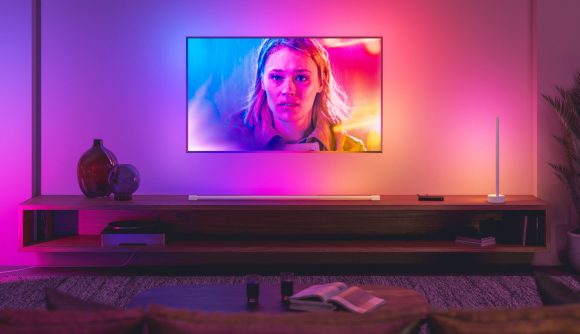 RGB LEDs and lighting kits can be a wonderful way to spruce up your gaming PC setup with personalised colours and animations, but much like many of us in the office, they’ve never been good at dancing to music. Fortunately, Philips Hue has accompanied its new range of smart lights and lamps with the announcement that it’s teamed up with Spotify so your bulbs better change colours to the beat.

Like most other smart LEDs, music integration usually features harsh flashes that flicker with the help of third-party apps – in Philip’s case, that’s Huegasm. Bringing Spotify into the loop directly should mean more organic transitions that suit the genre of music you’re listening to much better, as colours swap, change brightness, and animate differently on a per song basis.

The magic happens in the Philips Hue app, which uses the metadata of each song to craft a personalised script. You can then manually alter things to your liking if you want to increase or decrease the brightness, or even change the colour palette to something more pleasing.

To use the new deep integration, you’ll need a Spotify account and Philips Hue Bridge attached to colour-capable lights – but these don’t have to be from the new series. The update has already started rolling out in early access, and is expected to reach all devices by some point next month.

As for new products, Philips is expanding its gradient lineup with a light tube that surrounds your gaming monitor in a similar way to Govee’s Glide, there are new ambient-focused filament bulbs that forgo RGB in favour of changeable warm and cold whites, bathroom lights, and ceiling panels.