Phoenix Point has been a contentious game since it released on December 3, 2019. Created by the original designer of the X-COM series, Julian Gollop, the tactical/strategic hybrid definitely leans on some of the hardest underpinnings of the original title while giving the nod to innovations brought by Firaxis Games in the XCOM reboot.

Released exclusively on the Epic Games Store for a year, divisions were already running high although some of that will have been mitigated now thanks to the game’s release on Steam via the Year One Edition.

Our Phoenix Point review picked up on some notable bugs and balance issues, although there has been a lot of improvements to the game over the past year – and several expansions to boot. It’s an experience that will benefit from ongoing discussions of strategic deployment, tactical nuance, and general exploration. Luckily for you, we’re here to provide you with some basic tips and tricks to help you navigate this familiar – and yet at the same time, strange – turn-based strategy game.

Rather than a concrete list of ‘do this, now that’ tips, we’re going to offer you a set of basic principles that should help guide you as you explore the world of Phoenix Point and what it has to offer. Don’t to check out our Phoenix Point campaign guide if you want specific help with the strategy layer and main narrative. 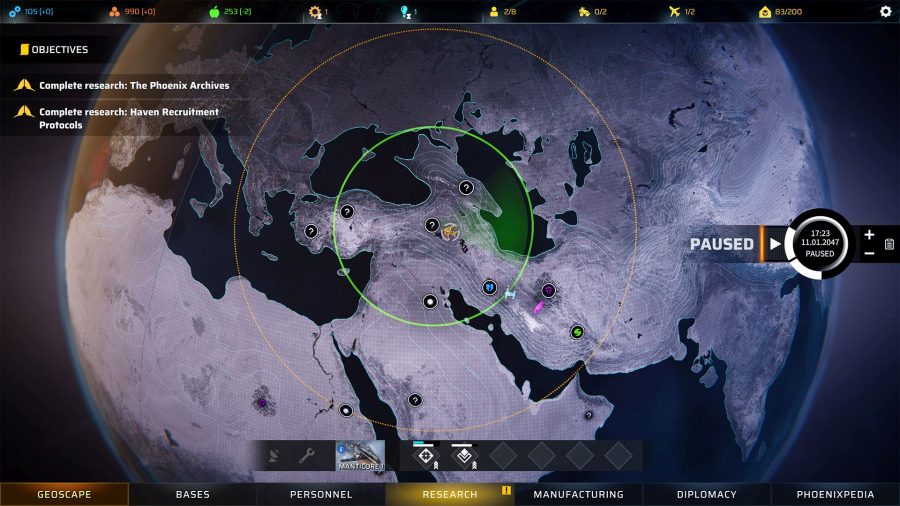 Phoenix Point is not XCOM

This may be difficult for some people, especially XCOM fans, but the same strategies will not work. Character classes have different strengths and weaknesses. If you play Phoenix Point as if it were XCOM, you’ll have a bad time of it. Think of it more of a roguelite than an XCOM-like.

The whims of RNJesus are a big deal. Sometimes you will be in situations which you can’t actually beat and it becomes reasonable to figure out how to save as much as you can. Randomly generated maps and available characters make every experience very different.

The power of random means that even in a worst-case scenario, all is not necessarily lost. Sure, maybe you lost two good men or women on that last fight against Tritons and Sirens but you very well may be able to pull it out at the last minute. You might even be able to pull off several more heroic saves until you can get enough resources to pick up some replacements. At least try before you give up for good. 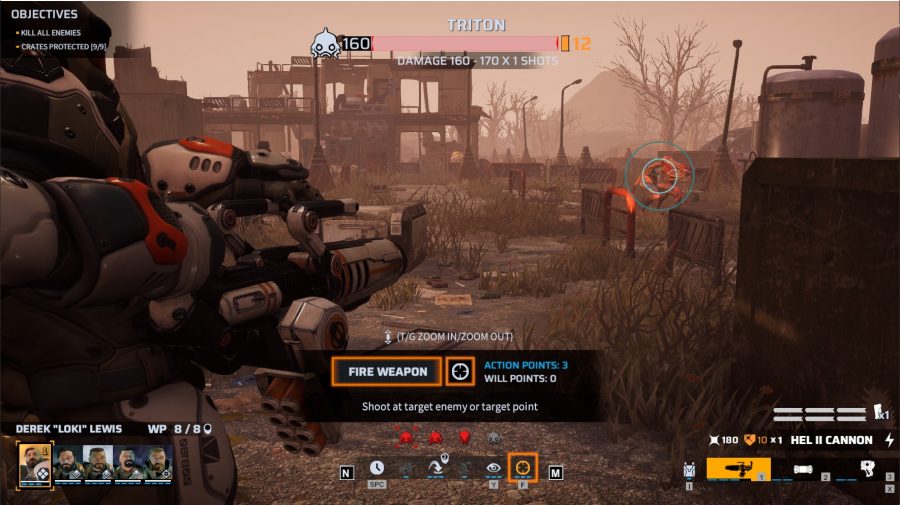 You are not expected to win

Especially on the higher difficulties. In order to succeed, you need to be clever, understand the tools at your disposal, understand the weaknesses of your enemies, and manage your relationships with the major factions – all at the same time. It is not going to be easy, no matter what others say.

Overwatch is not a waste of time

If you’ve been conditioned by XCOM, you think that saving some Action Points to take a shot if something moves in your overwatch cone is just wasted AP because you are unlikely to hit. Not in PP. Because of the way ballistics are more directly modelled, your chances to hit if you can get something in overwatch are pretty good. Sometimes better than taking normal shots. A previous patch forced characters with burst-capable weapons on overwatch to fire full bursts rather than half bursts; this makes a huge difference to your ammo consumption. 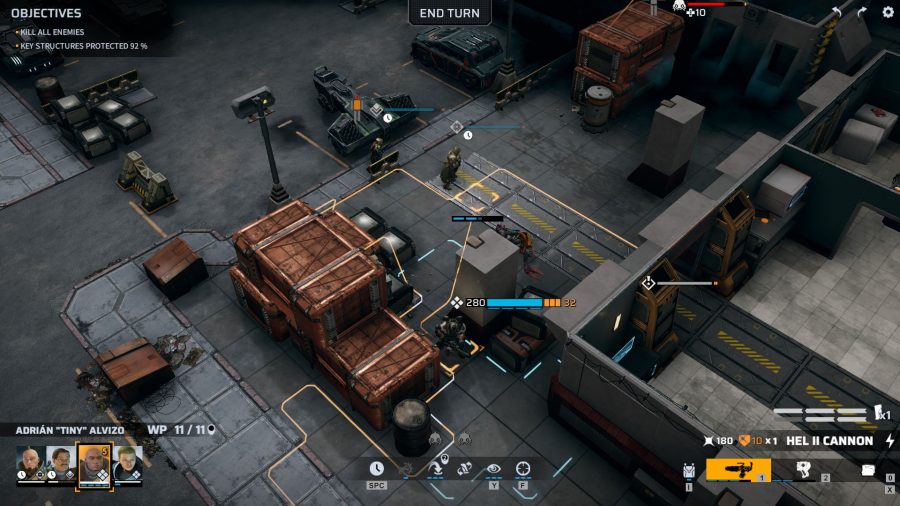 The Hel Cannon is great in overwatch

Because all characters have four Action Points per turn and firing the Hel Cannon (without skills modifying it) requires three AP, putting your Heavy in some cover along the line of approach to your team with one AP and then going on overwatch means you are likely to be more careful with positioning and catch your enemy at much closer range, where the single shot death machine has a much better chance to hit.

Enemies are not the only valuable thing to shoot

Only heavy weapons and sniper rifles can penetrate terrain to do damage to things behind it. Don’t forget that the lowly Ares AR can blow away a lot of blocking objects to allow all a clear shot from someone in a protected position. This is particularly useful to set up shots from your Sniper, who won’t have enough Speed to be in exactly the right position at any given time. A friendly Assault can also take down an intervening wall for headshots. 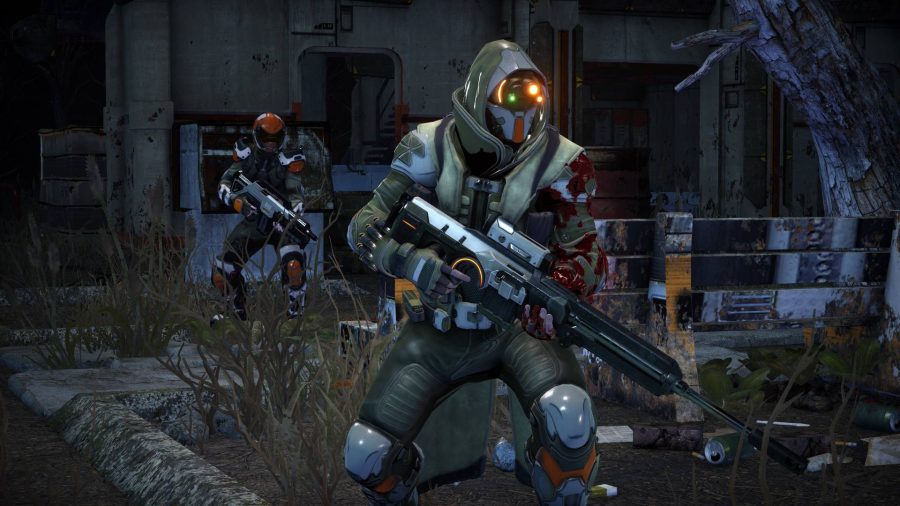 Pistols are not a waste of time

While they aren’t powerful (and in the case of the Synederion side arm, more akin to an angry bee sting), pistols have an extremely low AP cost both in direct fire and overwatch. A Sniper with Extreme Focus that allows him to reduce overwatch costs by one AP effectively can go on overwatch at the end of every single one of his turns with his pistol for free. Against things like fire worms or acid worms, that means kills at medium-range every time. Even against bigger prey, a two AP pistol shot can keep the pressure on and sometimes even blow a limb completely off.

“Boom, arm shot” is a sound you will grow to love

Particularly for crab men (I mean Arthons) and Tritons, keeping them from using their rather vicious weapons can be more useful than outright killing them. Particularly if they are carrying grenade launchers, which can wreck your day and your entire team before you can blink twice. You can target the weapon itself but if you can make the shot, taking out the arm will be faster and more effective. Notice the stance of most of the mutants and how their arms tend to hang low. A Sniper bullet can slide around terrain or under shields and often take out arms on the other side. 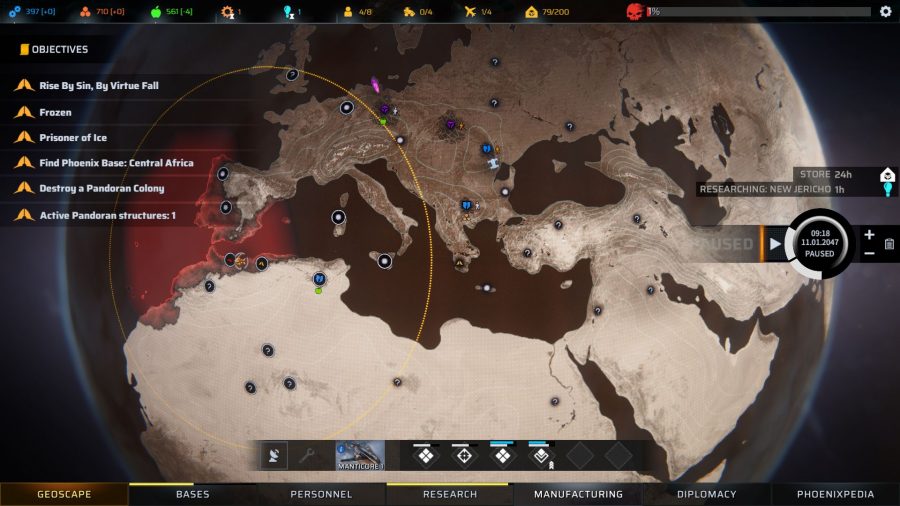 Human enemies can be some of the hardest

Except for the Siren. Missions against the other factions throw you against their best and brightest with technology which, early on, you won’t have any access to and often bests your own, especially superior armour. It’s the armour in particular that can be a problem because mutants don’t often have armour which covers their arms and humans almost always do.

Targeting weapons becomes a critical mechanism, balanced against the possibility that you could pick that weapon up and research the technology after the fight. Assuming you survive.

We’ll update this guide with further tips and advice as it comes to us.