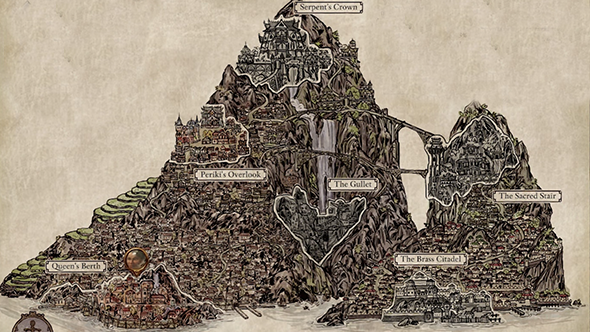 Pillars of Eternity 2 draws from the history of the East India Company as inspiration for its capital city, Neketaka. The city is torn between the competing interests of the trading companies looking to exploit the resources of the Deadfire Archipelago and the natives trying to turn this foreign interest into personal gain.

Can’t wait for Pillars of Eternity 2? Here are the best RPGs on PC.

Talking to us last week, Pillar of Eternity 2 director Josh Sawyer says that Europe’s imperial history was very much in mind when designing the game, and Neketaka in particular.

“We’re definitely trying to draw connections to things like the East India Trading Company, and various Belgian and Dutch trading firms as well,” Sawyer says. “Each of the colonial cultures has a different interest in the area. They overlap a little bit, and they are in direct competition.”

Neketaka has a long history. Its original builders are the Huana, an ancient tribe that were contemporaries to the Engwithan, the precursor race that you learn about in the original game. Unlike the Engwithan, though, the Huana were set back by “a big, cataclysmic event that occurred, and wiped out a huge portion of their population,” Sawyer says. “They had to rebuild from almost nothing. Neketaka is actually a surviving element of that ancient culture, but it was abandoned for centuries until it was repossessed by a powerful Huana tribe, the Kahanga.”

The Kahanga is “nominally the ruling tribe of the Huana, but they don’t really respect their authority.” The queen and prince of the tribe have a strong military but they don’t command as much respect among the tribes as you’d expect of “autocratic rulers.”

Then, within the city there are: the native Huana; the Vailian trading company – a group sponsored by the Vailian Republics, who you could encounter in the first game – they control a district called Queen’s Berth; and, finally, the Royal Deadfire Company. They control their own district, too – a large, fortified district.

Hated by everyone are the Principi, a pirate collective. Naturally, with so many traders around, the Principi have infiltrated the city with their agents.

All these factions are interlinked with alliances and rivalries, and being an Obsidian RPG, many of them want you to help turn the faction confusion to their advantage. For example, Sawyer explains the queen’s plan: “She is trying to play them off against each other, but she’s playing a dangerous game. Those groups are very powerful, and because those tribes are not that unified, they are vulnerable to outside colonial forces that are more organised.”

But you aren’t just a pawn for these groups, Sawyer says: “The player has their own agenda for coming to Neketaka [and] you see different elements of each faction before you get to make alliances among them. You’re pursuing one objective, but it drags you into the middle of these four groups. Neketaka is a place where you see these cultures coming together and you see the dysfunction between them. As a player, you can be extremely resistant to making alliances with them, and although it’s very difficult, we do offer the option to go your own way. But, all these factions want to do a ‘quid pro quo’ with you, like ‘Why don’t you help our faction? We’ll help you achieve your objectives’.”

We’ll have more stories and features from our interview with Josh Sawyer going up later this week.