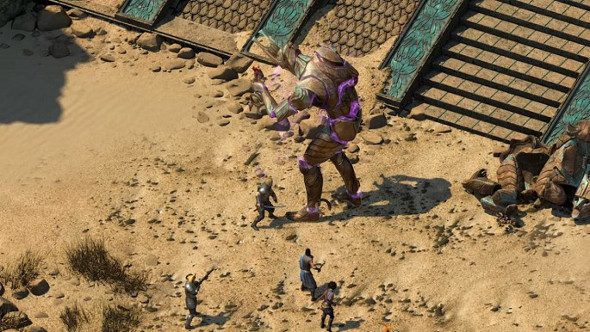 Obsidian was on hand at E3 to show off the first gameplay footage of Pillars of Eternity 2, complete with sailing, dungeon-crawling, and getting squashed by a colossal stone bloke. Just an average day adventuring around the Deadfire Peninsula.

For more fantasy adventures, take a gander at the best RPGs on PC.

Since your big ol’ castle gets destroyed right at the start of Pillars of Eternity 2, you need a new home. And you know what’s better than castles? Floating castles. As a ship captain, you’ll be sailing across the region, getting into all sorts of bother on the high seas. Obsidian want to encourage exploration more, and while the first game was expansive, they want this one to be even better when it comes to tempting you off the beaten track.

At sea, you’ll also have dilemmas, more Choose Your Own Adventure style crises that crop up and require you, as the captain, to make difficult decisions. In the demo, a plague ship is encountered. Different courses of action are available, but it’s better to be safe than sorry, so the ship is fired upon and sinks to the depths.

I enjoyed Pillars’ combat, though it proved to be somewhat divisive. Obsidian have made some improvements this time around. “We’ve put a lot of effort into trying to slow the pace down a little bit. Make combat a lot clearer, the feedback is a lot clearer, the visual effects are not quite so overpowering.”

The effects might not be as overpowering, but they are prettier. The game looks to be generally easier on the eyes. “It’s a huge step up from the first game,” Obsidian say. “We’ve improved pretty much every aspect of the game, including all the lighting and background rendering, to better integrate the 2D and 3D look of the characters on the backgrounds.”

Battles promise to be a bit more epic, too. While the first game had its fair share of monsters and the occasional dragon, the battles were usually small-to-medium in scale. In the demo, the party encounters a huge stone guardian, towering above them. Obsidian say there will be more of these large enemies. And they’ve got abilities that reflect their size. The giant grabs one of the heroes, holding him in his gargantuan hand before squashing him. Rude!

Though only a brief look at a single side-quest dungeon, Pillars of Eternity 2 is already looking promising.