From a distance, the first Pillars of Eternity could seem a little dry – drenched in pretend history then baked to resemble the best RPGs of the ‘90s, it is akin to a tea-stained map in an elaborate school project. To an extent, it had to be that way as the game promised to Kickstarter backers in 2012 was a return to what they loved about Baldur’s Gate, Icewind Dale, and Planescape: Torment.

There was no room for the wild, creatively unrestrained colour of Divinity: Original Sin II, nor the weird communist world order of Obsidian’s own Tyranny. Pillars of Eternity’s nation of Dyrwood was born when designer Josh Sawyer flipped a map of the Dalelands in the Forgotten Realms – of Dungeons & Dragons – and stuck a bunch of new labels on it.

Obsidian tasked themselves with recreating the feeling of decades of D&D lore. On top of that, perhaps they considered that, in Baldur’s Gate, the shelves of Candlekeep library were filled with books referencing the stories of RA Salvatore and Ed Greenwood.

Obsidian wanted to match the commitment to detail of these fantasy worlds. As a result, some of the information stuffed into the Pillars games can feel extraneous. It is difficult to care about the fact that the Vailian Republics lie to the south of Dyrwood and Eir Glanfath, and are ruled by a duc elected by the Consuagli Asegia, a council of 14 ducs, including its five most prominent, the Ducs Bels. It just does not leap off the page.

But when you play Pillars of Eternity II, all of that fake history seeps into the people and the environments, enabling the kind of cultures and quests you have not seen before. The dryness of the first game is gone. It seems appropriate that you spend a lot of your time on the ocean in the sequel.

Welcome to Tikawara, a small village on one of the less fertile islands in the Deadfire Archipelago. The village is home to a Huana tribe, one of many loosely connected groups native to Deadfire. After too many fatal run-ins with colonists and slavers on the more popular islands, they have retreated here, where the land is barren. Caged on the beach are a gaggle of Lagufaeth, the four-armed amphibians who take the best of the local food. In some ways, this is their island. 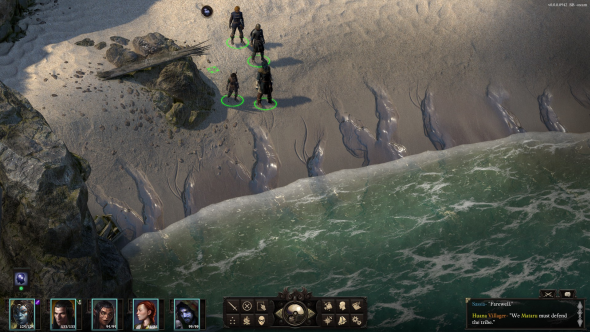 The Huana live simply; in huts with thatched roofs. But wander towards the trading outpost at one end of the shore and you will see the beach become thick with lavishly-decorated rugs and finely-weaved baskets. The tribe’s plumage is on display in an attempt to attract passing merchants from the seafaring empires.

It is not working. The trading outpost houses a single nervous-looking dwarf – the remainder of an expedition sent to hunt for luminous adra on a nearby isle. When the expedition arrived, the Huana plied their guests with food and drink, treating them like the first clients of a new business. Their disappearance, however, suggests they are unlikely to be repeat customers.

Despite the setback, the local chieftain greets you and your party with a warm, if slightly fearful, smile. But behind that gracious hospitality is an ugly reality: the labourers at the bottom of the Huana’s cultural strata are going hungry while their guests dance drunkenly on the beach. 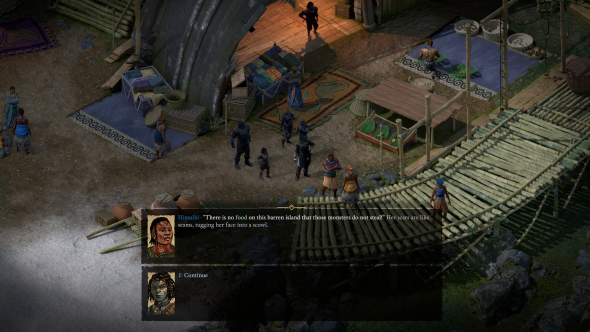 From the Huana perspective, this utilitarian commitment to the greater good of the tribe is not as callous as it seems. They visualise existence as two starving eels – one representing the overworld, the other the underworld, each devouring the tail of the other. Life and death, as the denizens of this village perceive them, are merely the experience of passing through the digestive tract of one eel and into the other.

That might sound a little (in)Human Centipede to us, but the upshot is that, just as the Huana pass through the eel of life into the underworld, they must also reemerge from the underworld and return to life. It is this sort of cyclic thinking that can make a caste system much more palatable.

In Huana society, the warriors and priests govern. Below them are the Kuaru, the craftspeople who live in relative comfort, and lower still the Roparu. It is the duty of the Roparu to starve during lean times, since they are destined to be reborn into a higher class in their next lives. 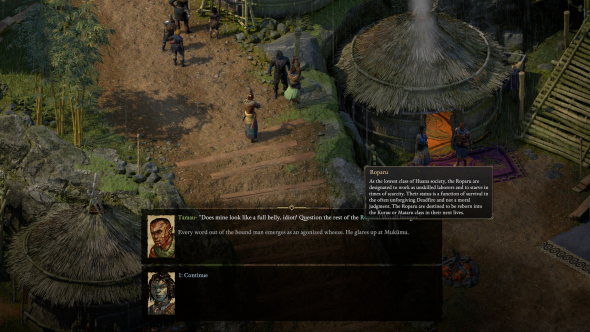 Understandably, some Roparu are more down with this than others. Meet Tamau, bound up to be left for the tides after repeated thefts and misdemeanours. “I say that I deserve what others have in plenty,” he argues. “Shade, a full belly, a moment to kneel on cool sands.”

And so a tiny hub for stocking up on equipment before the next dungeon reveals itself to be much more: a hive of tension and cultural unease, which becomes more fascinating with every conversation. Obsidian’s delivery of this lore is more subtle than in many of their peers’ games, too. Pillars of Eternity II borrows the tooltips from Obsidian’s last RPG, Tyranny, allowing you to hover over any highlighted word in a conversation to read more about it. It is an elegant system that takes away the chore associated with a pile of unread codex entries.

To describe the worldbuilding of Pillars of Eternity II as ‘rich’ or ‘deep’ would do it a disservice. Although those words are intended as compliments, they are in themselves a little boring. Lore does not just make the Deadfire islands rich or deep; it makes them unique and exciting. It makes exploring these maps an act of anthropology, rather than just exploration and monster-killing.

Pillars of Eternity II is not a made-up history book bound together in the name of D&D nostalgia, although it may appear that way at first. It is an altogether more alluring game for its alien logic and cultural quirks.