Even at 600 metres away, the Rathun must be an intimidating sight. If you squint a bit they look like Vikings. But Vikings, even the really scary ones, were never ten feet tall. Or, for the most part, on fire. While the eye slits in the Rathun’s helmets suggest facial features, they merely give shape to the flames that lick beneath. When the Rathun smoulder, they really smoulder – the fire falling across their glowing shoulders like molten locks.

Read more about the nitty-gritty of Pillars of Eternity II’s deep ship combat.

With a bark from our protagonist, Sassia, the helmsman spins the wheel to starboard, pulling the ship around 90 degrees to broadside the approaching Rathun longship. As a blue-skinned Aumaua, Sassia stands a good head above the humans on board herself. And as a multi-classed fighter and rogue she is officially a ‘swashbuckler’ – a designation that, perhaps falsely, grants some degree of confidence in situations like these. Still: better to keep our distance and hope the water can douse those flaming heads.

The Rathun longship cuts across the waves to close the distance to under 500 metres. Frightening, yes – but that brings it within the effective range of my iron thunderers.

The cannoneers light the fuses, and with a whoosh that shudders across my headphones in stereo, a couple of the cannonballs puncture the longship’s wide sail. If I can cut it down completely, the Rathun will be left bobbing like horny-helmed schmucks, unable to move. Being a walking furnace is no help when all you can do is stare.

What is extraordinary about this battle is that it is taking place entirely in text and static images. For their swashbuckling sequel to Pillars of Eternity, Obsidian have built atop the choose-your-own-adventure-style sequences that were a highlight of the first game. They were lavishly illustrated representations of the scenes where individual characters’ athletic and outdoor skills came into play. But here, in the sequel, they allow you to resolve naval encounters through art and prose alone.

A compass on the UI shows your ship’s direction in relation to your opponent’s, and a single figure on the dash keeps track of the distance between the two vessels. Together, these tools are enough to conjure 3D space and real tactical challenge. The glue is Obsidian’s evocative writing and some restrained sound design, working in tandem to suggest the spray of the ocean and the crack of splintering wood. 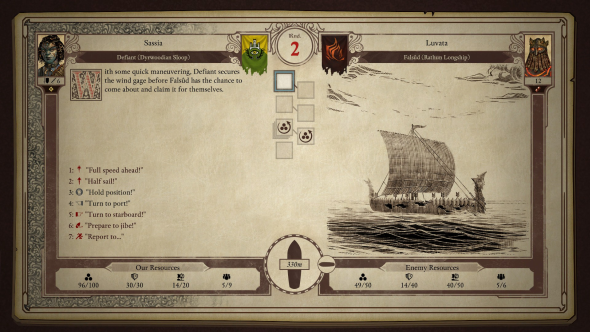 Thankfully, our galleon avoids any splintering this round. The longboat spends its single, front-facing cannon shot in vain, and speeds into close proximity at full sail. “Prepare to jibe!” Sassia yells. Then, with what is presumably a quite strenuous manoeuvre, the crew turn the ship 180 degrees, bringing the starboard cannons to bear.

These are specialised for short-range attacks: Vailian Hullbreakers, favoured by merchants and smugglers with cargo to protect; and nasty Chainshot Cannons designed to pick off the crew. Sassia orders the deckhands to hold the ship steady, increasing our percentage chance to hit. The volley is deafening. When the smoke clears there are fewer flaming eyes on the enemy deck.

Crew are a sailing resource in Pillars of Eternity II – as is food, water, medicine, ammunition, and the materials for repairs. Fail to keep your privateers well-fed and their morale will drop. Let them starve for too long and their numbers will dwindle as well. All of this upkeep plays out on an overworld map far more interactive than those conventionally included in classic RPGs of this kind. Fog of war blankets the oceans, and you freely explore them in your chosen vessel, uncovering new islands, caches of resources, and smaller areas to discover on foot. 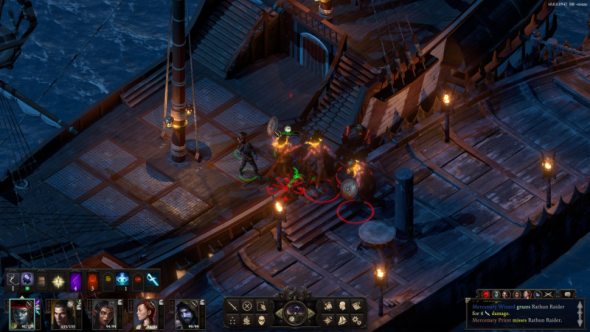 This style of exploration is highly reminiscent of that found in Obsidian’s underappreciated Neverwinter Nights 2 expansion Storm of Zehir. In it, you steered your party manually across the wilderness between town and dungeon, uncovering side-quests and secret locations as you went. In Pillars of Eternity II, overland travel makes the Deadfire Archipelago feel like the unopened box of riches, curses, and luminous adra its colonists consider it to be. But the adventure is at its finest at sea, where you are accompanied by the continual creak of the rigging, and where ship encounters await just beneath the fog.

Crunch. As the distance closes to spitting range, the Rathun longship rams head-on into our galleon, slamming the starboard side and sending sailors flying. Both vessels take hull damage, but it is not enough to sink either, and boarding planks slam onto the deck. Ten foot tall. Flaming heads. The Rathun make short work of Sassia and her party, triggering the load screen.

The stakes are high for pirates in the Archipelago. But seconds later we are back on the water, determined to sink the Vikings and claim their wreckage as bounty in Pillars of Eternity’s unexpected new highlight.