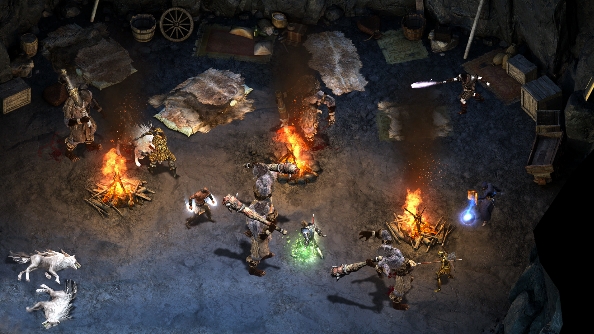 Update: There’s a Pillars of Eternity livestream kicking off soon, where the developers will be answering questions sent in by the viewers. That seems like a good place for a game announcement, eh?

The Obsidian livestream will be helmed by the studio’s Josh Sawyer, a man who was tweeting hints earlier about some imminent news, as you can see in the original story below.

If you need to get your questing fix in now, check out our list of the best RPGs.

Now, I’m not sure what you know about Twitter etiquette, but a ‘like’ can mean a range of things. It can mean ‘lol’, ‘I’m ending the conversation’, ‘I’m bookmarking this tweet’, ‘I fancy you’, ‘I hate you’, ‘I like you’, ‘I’m just acknowledging you to be polite but I can’t be arsed to talk to you’, and a bunch of other things.

Humans are bloody difficult. That’s why it’s sometimes dangerous to try and interpret them. But don’t worry about all that – instead have a look at this tweet Sawyer liked. Yeah. Twitter likes can also apparently mean ‘I’m not allowed to say anything, but yes’.

Best watch this steam, then. It kicks off very soon (4pm PST). You can view it here:

Original Story: It looks like Obsidian are primed to officially announce Pillar of Eternity 2, a sequel to the popular crowdfunded RPG. A sequel has been openly discussed as a potential project by the team in the past, but there’s never been official confirmation that it’s ever going to be released.

“Obviously, as you’ve probably guessed, we’re starting to move forward on [Pillars of] Eternity 2,” said Obsidian CEO Feargus Urquhart back in May, 2016. “That is probably something that we want to look at [in terms of crowdfunding]. I think people felt like we delivered on our promise, and then that felt like we could go with Eternity II and people would support us again, because they trust us.

“Eternity 2 is not announced, [but] it seems silly for me not to acknowledge it, though. If someone asks “Are you working on it?”, I respond “Well, wouldn’t you work on it?”. So then they say “So you must be working on it”, and then I’m like “Well, yeah”.”

So we know Obsidian are working on it, and we know it’s probably going to be crowdfunded, but how are we sure there’s an announcement coming soon? That’d be this teaser from the official Obsidian Twitter account:

We also spoke to Obsidian’s Josh Sawyer in 2015, and he spoke openly about a willingness to do a sequel, even going so far as to hint at its setting.

“I would say in Pillars 2, if we wound up doing a sequel, which we certainly want to do, we would probably take it to someplace which is not quite as familiar. Which is exactly what Baldur’s Gate II did,” he said.

“Baldur’s Gate II took you to Amn, to Athkatla, which is nearby the rest of the Sword Coast territories but it’s different enough that it feels new and interesting.”