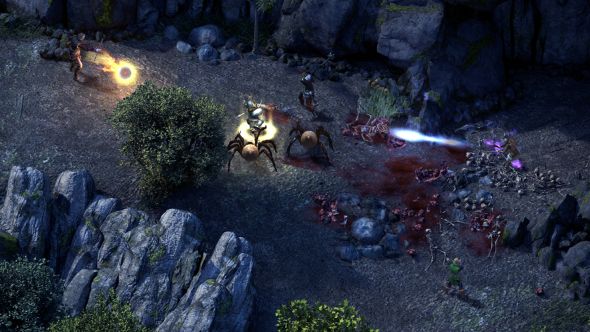 RPG makers Obsidian Entertainment have published a documentary on the making of Pillars of Eternity. The 2015 title was the company’s first Kickstarter project, and one of the first games in the current wave of old-school isometric RPGs that we’re all enjoying.

Pillars of Eternity made our list of the best RPGs on PC.

The documentary, entitled ‘The Road to Eternity’, had been released to the backers of Pillars of Eternity but is new to YouTube for the public to enjoy.

At the start of 2012, Obsidian were working on a big-budget Xbox One exclusive launch game, an RPG by the name of Stormlands. It was cancelled in March, which hurt the studio badly given how much they had invested in it. Layoffs had to be made, and Obsidian caught some reputational damage too, which made publishers less receptive to new game pitches.

Months went by without a new project, until the success of Double Fine Adventure on Kickstarter inspired Obsidian to try their own crowdfunding pitch, and we know how that went: almost 74,000 backers pledged almost $4 million, Pillars of Eternity was a huge success, and with Tyranny, Obsidian continues to reap the benefits of the isometric RPG renaissance they helped usher in.

Anyone interested in the turbulent world of game development, publisher/crowdfunding business models, or just how a great game got made, should check it out.