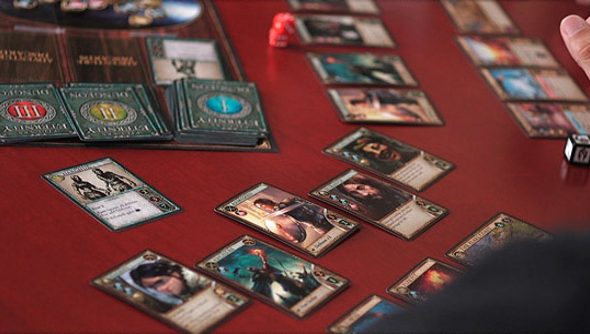 Obsidian was teasing “something awesome on the horizon” earlier today, and thankfully didn’t keep us guessing for very long. The Pillars of Eternity studio has teamed up with tabletop game developer Zero Radius Games to create Pillars of Eternity: Lords of the Eastern Reach, a card game for 2-4 players.

Lords of the Eastern Reach combines the party-based adventuring with empire building, with players putting together a city that they must protect while delving into dungeons for loot and monster-slaying.

Troops and heroes can be recruited to defend player cities and hop into dungeons, and they can also attack the lands of other players, because what’s the point in building a fancy city if everyone else is building equally fancy cities. They’ve gotta go.

You can get a quick primer on how it all works here:

Lords of the Eastern Reach is doing the rounds on Kickstarter at the moment, with Zero Radius Games looking for $30,000. Two stretch goals have been announced so far, as well. If the Kickstarter hits $33,500, then the game will include plastic tokens and a new player tile, and if it reaches $37,000, eight new heroes will be thrown into the mix.

The Kickstarter began an hour ago, and it’s almost at the $5,500 mark.