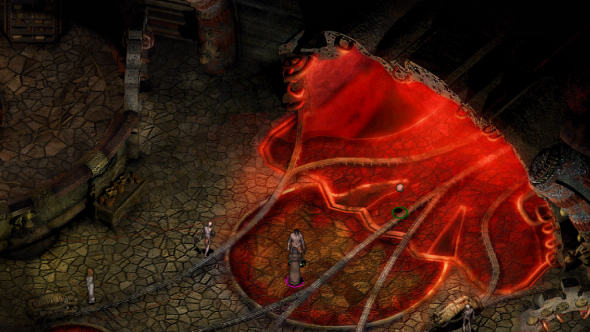 There’s a tendency to ease off the pedal as you near the end of a great book, not knowing quite how you’ll get by without its voice in your head. The new Torment, Tides of Numenera, is a bit like that: an astonishingly bold and literary RPG about legacy that stands alone among its peers.

Thank the Changing God, then, for the surprise return of Torment’s own legacy. Planescape: Torment Enhanced Edition is a brand new version of the classic RPG, out April 11, that represents more than a year’s work infusing the game with 4K-friendly features, an overhauled UI, and remastered music under the watchful stewardship of Chris Avellone.

The new version comes not from Tides of Numenera’s InXile but Edmonton studio Beamdog – where, lest we forget, Dragon Age’s David Gaider now resides. Beamdog are behind three enhanced Infinity Engine re-releases to date – four, if you count their own ambitious Baldur’s Gate expansion, Siege of Dragonspear.

This one isn’t wholly unexpected. Beamdog boss, Bioware co-founder and onetime Neverwinter Nights lead Trent Oster gets asked about a Planescape: Torment Enhanced Edition “pretty much once or twice a day”. But the project was never a sure thing either: the studio have always eyed this one warily, knowing that Planescape’s relation to the other D&D games of its time was less than straightforward, technically speaking.

“Baldur’s Gate and Icewind Dale were almost like brothers or cousins,” Oster explains. “Planescape is something like a second cousin twice removed.”

A shared D&D ruleset has allowed Beamdog to roll out character classes and fixes among all of their Enhanced Editions – Baldur’s Gate, Baldur’s Gate II, and Icewind Dale. But Torment’s Planescape-modified system doesn’t play nice. What’s more, when Bioware supplied the Infinite Engine’s code to the Planescape team back in the ‘90s, it wasn’t all there. 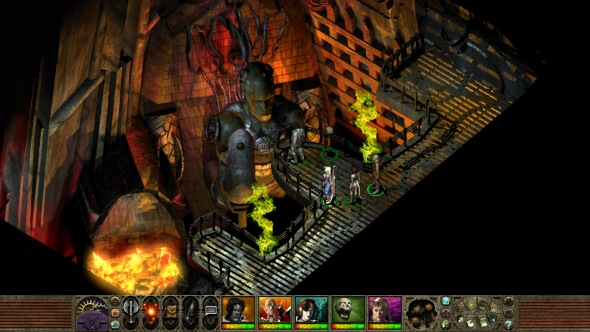 “They hadn’t finished the spell system yet,” Oster expands. “There are some things in [Planescape] that are just radically different. The only way we were going to make this work was to port the Planescape code over – and in some cases actually rebuild entire systems around supporting architecture that would directly conflict with the way Baldur’s Gate was doing things.”

This work, it’s important to emphasise, is all under the hood. Planescape: Torment Enhanced Edition is still very much the same adventure into Sigil and the multiverse you might have played before, its continuity ensured by the participation of original lead designer Chris Avellone. While no RPG writer can be considered an auteur – as Avellone himself made clear in our interview a couple of years ago – there’s a reason his name is that most often associated with Torment.

“He was part of all of the discussions around the story, about the game, why it was built the way it was,” says Oster. “He was that one touchpoint that we could get where he was so intimate with everything about that game.” 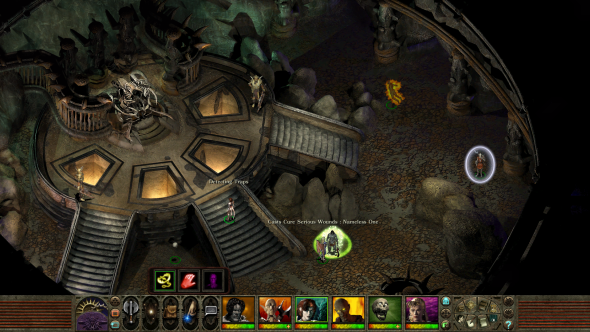 Avellone has worked in a background capacity with Beamdog before, acting as a script editor for Dragonspear.

“We were unsure about how best to interact with Chris, because he was at Obsidian before,” Oster recalls. “And then when he left we were like, ‘Yo, Chris! How you doing, buddy?’”

With the nomad RPG legend on board, the Beamdog team – led by Icewind Dale: Enhanced Edition project manager Alex Tomovic – have had a sounding board for their changes and inclusions. By digging into the code and referring to the “late ‘90s heavy metal” design documents of the game, they’ve been able to uncover and restore some lost content.

“Anything that was well-scaffolded and well thought-out that was left slightly incomplete, it came down to Chris,” says Oster. “We asked, ‘If this had shipped in the original, would the game have been better?’ 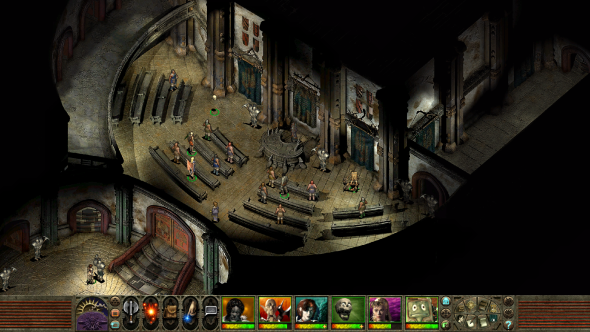 “When we did make some changes, they were very comfortable for the original design. There are some big things that we looked at and went, ‘This would make it better but we’re basically going in and repainting the smile on the Mona Lisa here.’”

Beamdog have, in the main, erred on the side of preserving Planescape as it was – simply polishing it up for modern PCs. They’ve rebuilt the interface in high-definition, jettisoning a radial menu when they found the game played better without it. They’ve brought the audio up to contemporary standards. And they’ve pulled over convenience features from the other Enhanced Editions, like tab highlighting and a ‘quickloot’ option.

“It’s really being able to know: what are sacred cows, and what are sacrificial goats? I think we’ve had weekly calls [with Chris],” notes Oster. “It’s just an ongoing discussion.”

Perhaps crucially, Beamdog have included the option to bypass most of their hard work and play Planescape: Torment as it originally was, flaws and all. That’s the funny thing about enhancements: it can be tough to accept somebody coming in and straightening the painting when it’s been hanging crooked for 17 years.