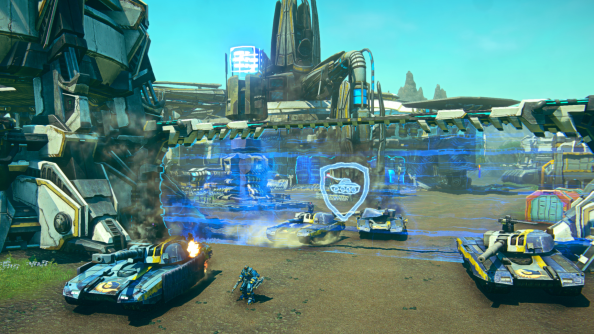 PlanetSide 2 doesn’t exist in a vacuum, and by that I don’t just mean that Auraxis enjoys a healthy atmosphere that makes it possible to sustain life. I mean that since the MMOFPS’ 2012 release, the former Sony Online Entertainment (now Daybreak) have stuffed their eggs into H1Z1 and Landmark – two freeform sandboxes with comprehensive crafting and construction systems.

What’s the best FPS with an .exe on PC? PlanetSide 2 is a contender.

That design influence now seeps into PlanetSide with new base building tools, all tied to the game’s larger themes of territorial conflict.

Construction is accessed through a magic mineral-harvesting car, the Advanced Nanite Transport, which can be summoned at any vehicle terminal. The ANT boasts a building terminal through which players can equip and place fortifications.

All construction comes with a cost in Cortium – the new mineral Daybreak have invented for the purpose. But if you’ve gathered enough Cortium from nearby nodes, you can put together bunkers, silos and manned defence turrets. As you unlock options, you can go on to install turret AI modules, anti-bombardment shields, garages and energy walls impassable to enemies.

Beyond that, factions can construct HIVES – structures which generate increasing amounts of victory points the closer they are to enemy warp gates. They’re powered using both Cortium and a limited number of ‘cores’. Factions can win more cores by destroying their rivals’ HIVES, which sounds like a recipe for fun player-set objectives.

Base building is already live in PlanetSide 2, which is, as ever, free-to-play on Steam. Anyone else getting C&C: Renegade flashbacks?