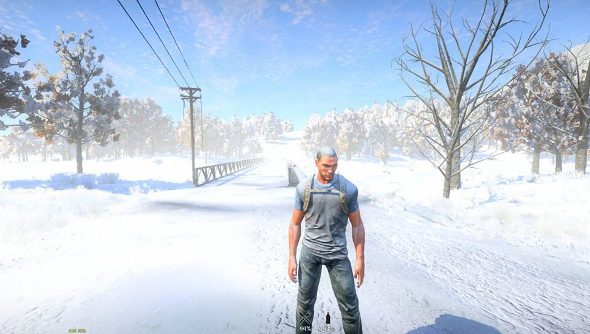 Auraxis, the location of PlanetSide 2’s global war, is a large, diverse globe – expanding still with the introduction of a new continent, Hossin. But it’s one where the weather never changes, unless you count drop pods raining down from above as a weather phenomenon.

Weather effects have been teased by SOE since before launch, and it’s one of the things the team’s been wanting to add for a long time. Amid all the new content, it’s still not been forgotten, as CEO John Smedley revealed on Twitter earlier this evening.

Both H1Z1 and PlanetSide 2 will see weather effects, Smedley said on Twitter, accompanying an image of a gentleman who is clearly not dressed appropriately for winter. The image is from SOE’s upcoming building and zombie-slaying survival MMO, H1Z1, but it’s a feature that will be present in both games.

yeah. snow too. also weather is coming to PS2 as well as H1Z1 pic.twitter.com/3LIUJ5ph41

I reached out to see what the plans are for weather in both games, but Smedley explained that things are still being worked out, and SOE isn’t quite ready to spill the beans just yet.

The ramifications in both games could be considerable. In H1Z1 it will likely tie into survival. Maybe rain will be a boon if you’re farming, but if you’re caught outside without a jacket, you might not enjoy it as much. Snow could make it easier to hunt, as animals leave tracks and struggle to flee when you start firing at them.

A follow-up tweet from Smedley did confirm that the elements would matter in H1Z1, so at the very least they won’t simply be an aesthetic change.

In PlanetSide 2, the weather could create problems for soldiers’ fields of view, rather than having a direct impact on survival. Imagine sandstorms clouding your vision as you assault a base, or thick stormclouds obscuring your troop carrier as you move in to deposit your payload of troops.

Until SOE reveals their plans, though, this remains nothing but hopeful ramblings.