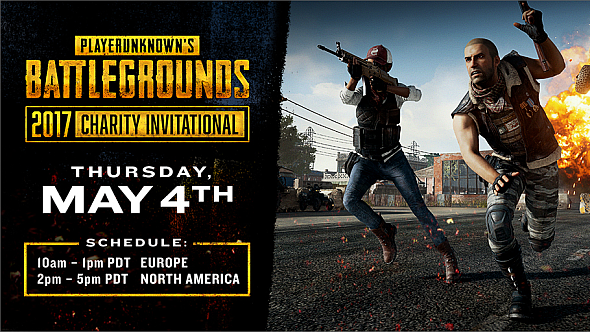 Update 05 May 2017: The Playerunknown’s Battlegrounds charity invitational raised over $100,000, with creators Bluehole matching it and throwing in their own $100k as well.

All in all, the event raised over $200,000 for Gamers Outreach which helps kids in hospitals get access to games and game-related therapy.

Original story 26 April 2017:Brendan ‘PlayerUnknown’ Greene is hosting a charity event in the game that bears his online moniker. The 2017 Charity Invitational will take place on May 4, and benefit Gamers Outreach, a charity that provides equipment and software “to help kids cope with treatment inside hospitals.”

The news comes via a post on the PlayerUnknown’s Battlegrounds (PUBG) website. The event will feature 128 streamers, split into two groups of 64 from North America and 64 from the EU. Each group will play three matches of Duos mode (so each match will be contested by 32 teams). The winners will be chosen from those that place highest after all three rounds.

Here’s what’s confirmed about timings so far, with more information on match format due “early next week”:

Here’s theofficial PUBG Twitch channel, where the event will be held. To learn more about Gamers Outreach and the good work they do, check out theirwebsite.

PUBG has developed a flourishing following on Twitch, where it gets more than 2,000 people streaming it every single day. Hence, Greene has had to be picky about whom he invites to this event, and is focusing “on those streamers with larger communities and those that have supported our game over the past 10 months.”

Greene has been doing this sort of thing since almost the beginning of his career, which began in the days of Arma 2 with the first Battle Royale mod. He held two charity events in Arma 3, raising $70,000 for children’s hospital charity Extra Life. With the massive popularity of PUBG, it’s almost certain that this latest event will smash that record.