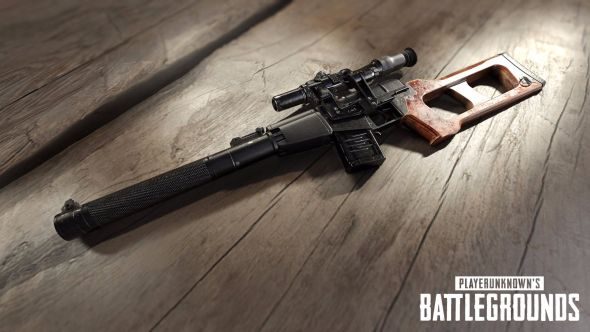 The ludicrously successful PlayerUnknown’s Battlegrounds is going full bore towards its second monthly update at the start of this week, and the teases are just getting started. The latest reveals that the game’s next weapon will be a sniper rifle that comes with a scope and suppressor, making you the deadliest assassin out there.

Want to know more about the man behind the year’s biggest surprise? We interviewed PlayerUnknown.

The announcement came via Twitter, including a lovely pic of the next thing you’ll be making chicken dinners with:

Well look at our second monthly update early next week on the dev blog, but for now we're excited to reveal our next new weapon… the VSS! pic.twitter.com/YJiL6svKgm

According to PvPLive[https://pvplive.net/c/playerunknowns-battlegrounds-adds-the-vss-vintorez-next-monthly-update], the gun will come equipped with a scope and suppressor. They also say that while it sounds incredibly powerful, at extreme ranges it’s going to be very difficult to hit anything due to bullet drop. You’re also not exactly at an advantage going up a stairwell or bursting into a building.

As noted last week, PlayerUnknown has been at work in the mo-cap studio working on new animations. Per his latest tweets, they’ve also been working on climbing and run-n-gun animations.