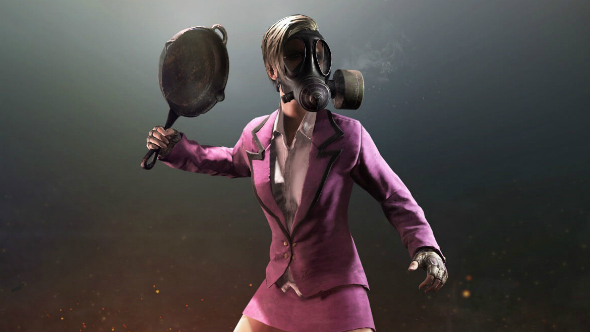 Update, March 2: The Chicken Dinner Challenge has been successfully completed.

A PlayerUnknown’s Battlegrounds player has completed the Chicken Dinner challenge. Andrew Panton’s challenge ran throughout February, and meant that the only food he would permit himself to eat were the chicken dinners he earned in-game.

According to PUBG Corp, Panton’s chicken dinners are just a few in the 130 million that have been served so far.

Miraculously, Panton managed to complete the challenge, securing himself 30 chickens over the 28 days in February, maintaining an average of over one win per day. Despite managing to secure consistent chickens, however, Panton says the challenge did take its toll.

While he says that at no point did the challenge get “bad to the point of me being seriously concerned about my long-term health” (he had previously said that he would quit the challenge at the first sign of any major trouble), there were other difficulties; “on the physical side, I felt like a zombie for most of this and dealt with frequent stomach pains.”

The downsides weren’t just physical, either. Panton says that “beyond all the physical, the mental stress of constantly feeling the pressure to win was brutal,” and his daily streaming schedule meant that he couldn’t fit a personal life in if he wanted to eat.

There were plus sides to the challenge though: “the positives was that as someone who has social anxiety forcing myself to stream every night for a month was a big personal deal for me. The first few nights just putting myself out there like that was really hard but I was able to overcome that and because of that I feel like I have grown as a person.”

With the challenge over as of last night’s Victory Lap stream, Panton wasted no time in getting some actual vitamins into his body, as you can see below:

28 days, 30 chicken dinner wins, and a whole lot of laying in bushes summarizes the craziest month of my life. It was amazing, it was terrible, but most of all and this might only make sense to me, but it was everything. The final stream is tonight but normalcy starts now. pic.twitter.com/xZ7kjR4MJw

Original story, February 7:In 2004,Super Size Mefollowed the misadventures of Morgan Spurlock as he ate only McDonalds for breakfast, lunch, and dinner for an entire month. Despite its very modest budget, it made more than $20 million at the box office and was nominated for an Oscar. But that was 14 years ago, and so it’s time for a brand-new challenge to capture the hearts and minds of one of the internet’s biggest player-bases.

The Chicken Dinner Challenge is the brainchild of Andrew Panton, who works on the creative team at Achievement Hunter. For the entire month of February, Panton is limiting his diet to only what he is able to catch in PUBG. If he wins a match, he is permitted to eat one roast chicken, but if he doesn’t manage to win a game, he goes hungry.

When I spoke to him, Panton told me that the Chicken Dinner Challenge was inspired by the fact that “the pursuit of the chicken dinner has been one of the most relatable achievements in recent years for gaming. Everybody remembers the first one they got or the close misses.” The challenge began as a full meal, earned across three different battle royale games in a 24-hour window, but quickly evolved to the current format.

The rules of the challenge are simple, but punishing. They state that Panton; is “allowed to stack chicken dinners, and have the ability to cash out wins” whenever he wants; that he “will only play solo” (except on Saturdays, when he plays duos); and finally, that his “only source of food will be chicken dinners, meaning roast chickens. No sides, just chicken for the entire month.” At the time of writing, Panton has been undertaking the challenge for six days, and has been surprisingly successful. For each of the first five days he managed to earn himself one chicken. Yesterday, however, he won two games, securing himself an extra meal, should he need it.

Unfortunately, his success seems to be taking its toll. Panton says “chicken is incredibly boring! I really should have incorporated sides, but I thought it was funnier if I had to suffer through the blandness.” So far, hunger hasn’t been too much of an issue, but Panton says “I certainly don’t feel fantastic.” Surprisingly, the challenge is having an emotional toll as well – aside the irritation of making “constant trips to grocery stores to buy pre-cooked chickens,” the challenge has made the unsuccessful games “that much more painful. Typically you lose, that’s too bad, but it happens and you move on. Now it’s a stinging pain – I need at least one win tonight and who knows how long that will take.”

The medical benefits of a month-long diet consisting solely of roast chicken have probably not been tested, but Panton tells me he didn’t talk to any medical professionals ahead of the challenge (“but that would have been the smart thing to do”). Nevertheless, Panton’s position is that at the first sign of real trouble he will give up immediately. “I hope that I can last the entire month, but it’s obviously not at all worth causing any serious harm to myself.”

Andrew is currently on the seventh day of the challenge, with another three weeks of Chicken Dinners to get through. He’s streaming his efforts over on Twitch from 17:45 PST every weekday, as well as over the weekends, and posts updates every day announcing his winnings.