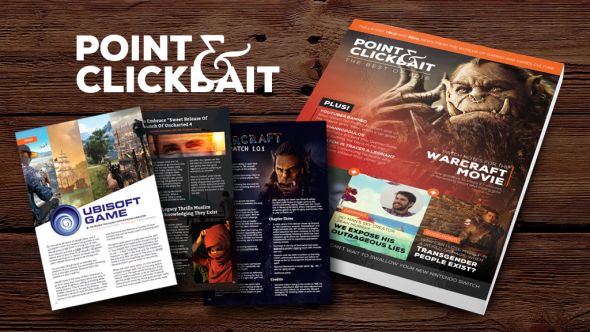 Point & Clickbait, home to (in my opinion at least) the best satirical gaming articles on the internet, is going physical. Its creator is Kickstarting a magazine documenting the site’s best articles of 2016.

Point & Clickbait: The Best of 2016 is an 88-page magazine documenting some of the most ridiculous stories of 2016, re-imagined with the site’s uniquely satirical spin. That includes stories like ‘Man Who Boycotts EA Games Plays Star Wars Battlefront for Fifth Time This Week’, and ‘Pigeon Trapped in Games Workshop Office Receives License to Make Warhammer Game.’ The magazine will also come with brand-new articles written especially for the physical edition.

Prices vary based on where in the world you are – Australian residents receive a slightly cheaper package, with one physical copy of the magazine costing AU$ 20. International residents can get their copy for AU$ 30, or around £11. You can also grab a PDF version of the magazine for £3, which, as pointed out in the Kickstarter, is DRM-free. Which is Nice.

The Kickstarter is live now, and will run until Wednesday, April 11.