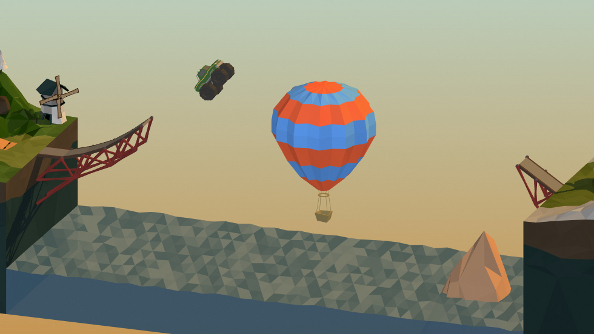 Bridge building: what a bloody nightmare. It’s all maths and physics and people judging you when one car full of holidaymakers ends up at the bottom of a river. Not in Poly Bridge, though. Dry Cactus’ Early Access bridge building game is the genre’s equivalent of Calpol. It’s brightly coloured, relaxing and you could probably give it to a kid – they’d be all over it.

Really, Poly Bridge is more of a physics puzzle game than a bridge building sim, encouraging experimentation and bizarre creations rather than what you, I or any sane human would call a “bridge”. That’s okay, though. It’s a great puzzle game. Sometimes it’s a bastard. Sometimes it’s a relaxing way to kill 15 minutes, with the laid back acoustic soundtrack covering you like a toasty blanket.

You look at it, and you think it’s sort of cute, it looks a little silly, but the aesthetic and game’s proclivity for whimsy belie the complexity hidden underneath the extremely relaxed atmosphere. Dig around and you’ll see that it’s still about numbers and physics. While you start by ferrying single cars across completely mundane bridges, rapidly the missions increase in difficulty and you’ll be juggling multiple vehicles and slapping together double and triple-deck bridges. 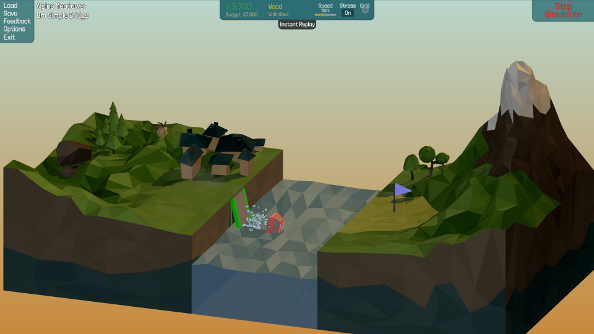 How many cars, what they weigh, how much resources and what sort of obstacles will get in your way all depend on the mission. Sometimes you’ll only get a meager amount of road to lay down, so you’ll need to make a ramp, sending cars into the sky. Occasionally there’s a boat needing access, so you’ll need to slap on some pistons and raise the bridge, all the time praying that it remains stable so that cars can cross after. Every now and then there are even hot air balloons in the way, but don’t worry, they are extremely bouncy.

You will make a mess. Cars will sink to the bottom of rivers and plummet off cliffs, and you’ll probably make plenty of hideous, uneven monstrosities that look like some sort of World of Goo nightmare, but there’s no judgement. You’re simply simulating how wonderfully/terribly your bridge works, so if you bollocks the whole thing up, it’s fine. You can start the simulation at any time and see how your bridge holds up, and stop it at any time and go back to the blueprints.

When you do finally make a functioning bridge, it doesn’t really matter how pretty it looks or how close the people in those wee cars came to death. Poly Bridge’s relaxed attitude extends to its objectives: if the vehicles make it to their destination, it doesn’t matter if the whole bridge collapsed behind them. 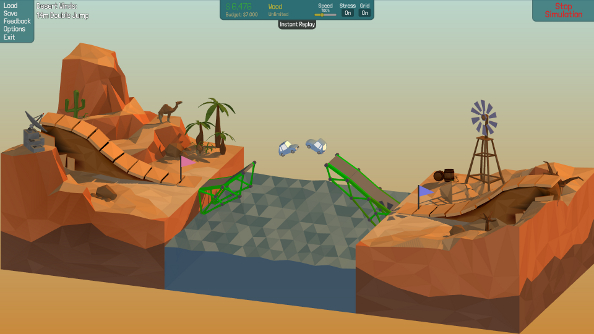 Once you complete a level, you don’t get a rating, but the game does record how much material you used, if you were under budget and how much stress was put on your bridge joints (you can see the stress for yourself when you hit simulate). At the moment, it doesn’t compare these with other players’ results, but it looks like that feature is planned.

If there’s one thing that makes Poly Bridge feel like an Early Access game – and most of it doesn’t – it’s the UI. The wee box at the top of the screen that details your budget and how much of the selected parts you can still use is fine, but how you select those parts isn’t. Pressing space or the middle mouse button brings up a radial menu containing parts both usable and locked, but there are no real tooltips – they just show how much of that resource you have, which you’ll be able to see elsewhere – and no breakdown of cost. If you’re not a fan of radial menus, then at least you can just use hotkeys for absolutely everything, which is handy, but there’s still that missing information.

Otherwise, there are very few bumps in the road. Building is easy, you just select joints to link with different materials, and the tutorial takes you through a variety of simple scenarios, teaching you the basics of building most types of bridges you’ll end up making, and it’s a doddle to delete or move specific parts of the bridge. The challenge is in solving the puzzle, not using the tools. 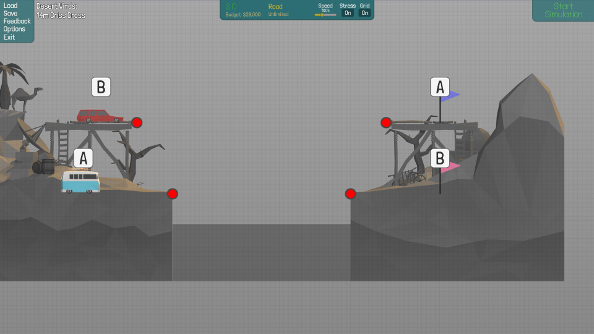 The aforementioned lack of that Early Access feeling is most notable in the community features, though it’s probably fair to say that, these days, plenty of Early Access titles throw in Steam Workshop support and social stuff quite early on. Regardless, it’s still always nice to see. Poly Bridge has 259 Steam Workshop entries, all user created levels for you to test your engineering skills on.

Sandbox mode, where you make these levels, is still in beta and isn’t particularly detailed. It is, however, all you need to make lots of different challenges. Simply raising the land on the other side of the river a wee bit changes everything. You’ll be able to fiddle around with the terrain, add a couple of obstacles, throw in a ramp and set events, like what cars go first and if there’s a ship that will need to get through.

Really, though, the most important community feature is gifs. Lots of lovely gifs! It’s silly, how much time I’ll spend watching adorable wee cars bouncing off hot air balloons or crashing into the sea. When you finish an attempt at a level, win or lose, you’ll get a replay that you can share on Twitter or simply save to your desktop, and you’ll have a delightful gif for posterity. You’ll be able to grab people on the street and make them watch an infinite loop detailing your engineering prowess. There will be swooning and jealousy and restraining orders.

There have been two updates since Poly Bridge’s Early Access launch at the end of June, mostly tweaks and bug fixes. In the 12 or so hours I’ve spent faffing around, constructing marvels of the modern world, it’s proved to be extremely stable and not riddled with bugs. Of course, this isn’t the case for everyone. The Steam forums has a few topics dedicated to bugs and crashes, but the devs are quick to respond and root around for a solution.

At the moment, you’re getting a fair amount for less than £10: two campaign worlds right away, each with 12 challenges, almost 260 Steam Workshop challenges and the ability to make your own. And it all works, which makes a nice change. If you have a burning desire to build lots of silly bridges or help tiny vehicles make some crazy leaps of faith, Poly Bridge can scratch that itch already.