Five years of development, a flashy, stunning reveal in 2012 and a boasted partnership with Nvidia – Ubisoft have been flaunting Watch Dogs’ good looks and and technical proficiency for a while. And in a game about near-future tech developed by a large, AAA studio, it’s not lunacy to expect it to live up to the boasts.

Good news, then, as Watch Dogs offers up a striking, realistic (at least visually) city to play in and a broad range of options catering to a large range of PC setups. The initial reveal isn’t quite representative of the experience most users will have, however, but even on medium or low settings it can impress. 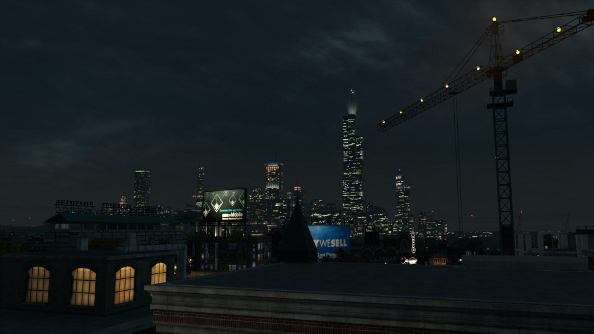 Watch Dogs is one of those unfortunate reminders that PCs are temporary, fleeting things and that what was once capable of handling anything thrown at it will inevitably become dated, struggling to keep up.

To get my rig to play nice with Watch Dogs, tinkering was involved. Thankfully, Ubisoft have a history of providing robust graphics options, and just like Far Cry 3 and Assassin’s Creed IV: Black Flag, Watch Dogs is pregnant with presets and individual options.

Textures range from low to ultra, the latter of which requires a 3GB GPU, but does look rather lovely. 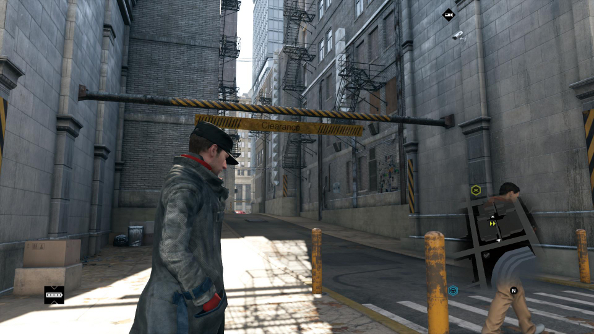 High requires a 2GB GPU, and still offers decent quality textures, though it brings the game closer to the PS4 version rather than the one shown off a couple of years ago. Closer to, but not the same, as there’s a lot more to Watch Dogs than just the textures.

While most options are absent explanations – a common oversight – the texture settings at least show what type of GPU they are for, at least in terms of video memory. The lack of explanations elsewhere continues to be a strange trend given the increasing complexity of PC options. It’s a bit off-putting if you don’t know the difference between FXAA and TXAA or what the hell ambient occlusion is.

In the display settings, where the texture options sit, one can also find the anti-aliasing selection. It ranges from FXAA to Nvidia’s TXAA. There’s was a noticeable drop in performance when using the maximum TXAA setting, but in motion the effect is quite clear, smoothing out edges and removing flickering even at great distances. 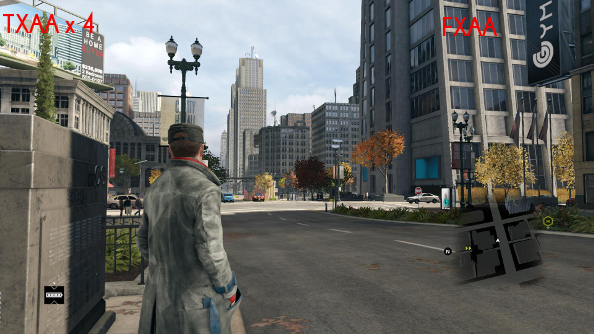 Further tweaking can be done outside of the display settings menu. The graphics settings menu contains various detail levels, ambient occlusion options and room to fiddle around with shadows, shaders and water. With the large array of items, it’s handy to have presets – ranging from low to ultra – but for the best performance they are best ignored.

Using the detect settings option, everything was set to high, but without Nvidia’s HBAO+ ambient occlusion. Unfortunately this gave me console levels of performance and I was forced to experiment to achieve a stable frame rate of 60. One of the issues is that the presets and the detect settings options don’t take into account things like AA, as it’s stuck in a different menu.

Even on the lowest preset, Watch Dogs remains a looker. The smaller details are less pronounced and the lighting less warm, yet it retains a surprising amount of fidelity. On the high and ultra settings, it’s still a noticeable upgrade though. Leaves clutter up the pavement, particle effects are more realistic and shadows are richer. 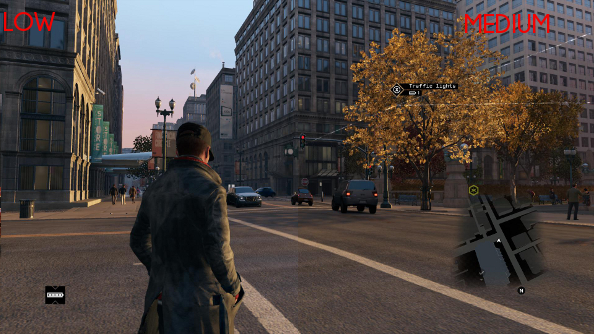 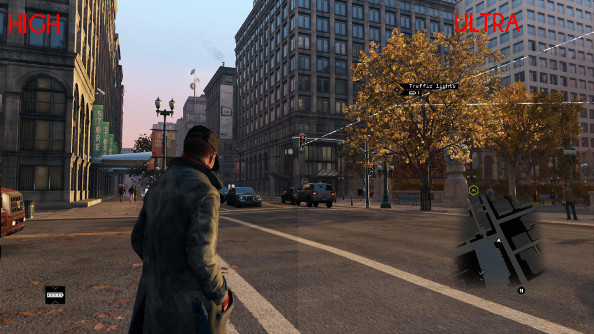 Watch Dogs boasts some impressive lighting, though during the day the game can look a little washed out. It’s at its best around sunset, which is undoubtedly why the 2012 reveal was set during that gorgeous time of day. HBAO+ does make a world of difference, giving Chicago more detailed, deeper shadows and a greater variety of lighting.

HBAO+ comes in two flavours, high and low, and standard ambient occlusion options are available as well. I found the high version a bit too much for my rig sometimes, tipping the precarious performance balance I’d found. The low version is still impactful but doesn’t have as high a performance cost. 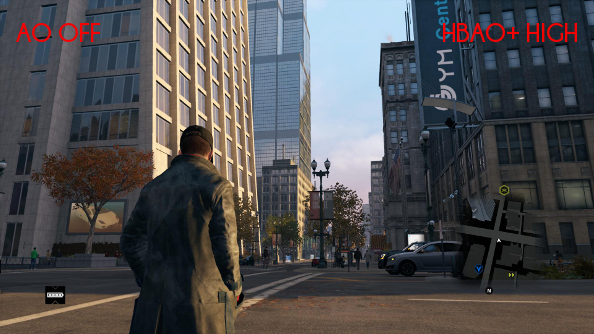 Most of my time with Watch Dogs has been with all graphics settings on high, with HBAO+ low, TXAA x2 and high textures. The frame rate fluctuates between 30 and 60, which is an improvement over the console version and a range I can accept.

Of course, a stable frame rate of 60 is much more desirable, but for that I have to turn most of the settings to medium, or at least knock the AA down to FXAA and turn off ambient occlusion entirely. It’s a sacrifice I don’t normally have to make, but Watch Dogs can be rather demanding.

Turning off motion blur and depth of field is also an option, but with the game channelling cinematic thrillers, it seems wrong to turn off elements that make that vision a reality. 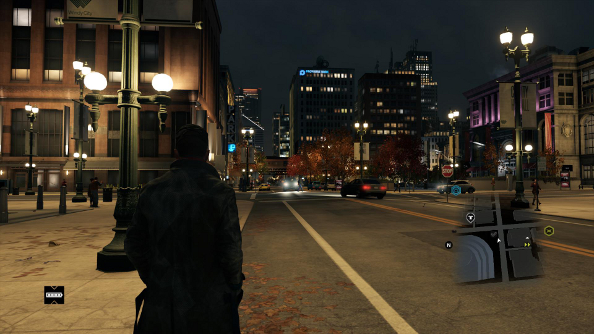 Despite Watch Dogs having no dearth of settings ripe for changing, the HUD and FOV are not among them. Both the minimap and hacking overlays take up a lot of real estate, and Aidan sometimes feels a bit squashed into the screen.

When I was playing it from the sofa, using my 50 inch TV, I didn’t have a problem. The HUD elements needed to be larger, as I was further away. But going back to a more traditional PC setup, everything seemed very cramped.

Watch Dogs can be a bit of a dichotomy at times. While the PC version is undoubtedly more than a basic port, and Ubisoft and Nvidia have added a lot of extras that console users won’t be able to enjoy, there’s still the hint that many features have been designed with console users primarily.

The control scheme is certainly one such feature. Driving with a keyboard and mouse is simply unpleasant, and even just walking around the city using that control setup feels less than optimal. It manages to be both sluggish and fiddly. If you turn off aim assist, however, the mouse and keyboard can be a lot more effective than a gamepad. 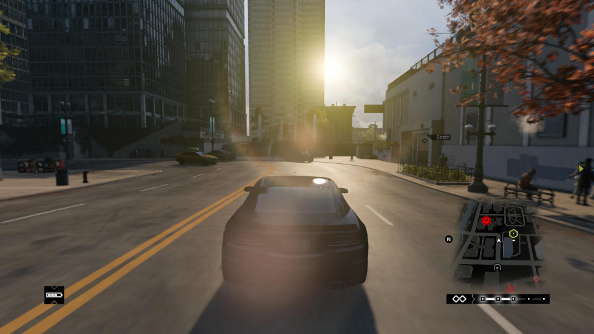 Switching between the two, though a bit of a pain, can be done without too much fuss. The game immediately recognises the change in input and alters button prompts and controls accordingly.

Watch Dogs is a Uplay title. Normally I don’t really mind, even if I’ve bought it through Steam and been forced to use Ubisoft’s platform. Unfortunately, the service is a bit of a mess right now. People are struggling to even redeem their codes, and I’ve been having issues with syncing and using the online features. This has only been a problem today, and I didn’t notice it at all prior to launch.

Despite these issues, Watch Dogs is a solid PC title. Created alongside the next-gen console versions, there’s not a huge difference between them unless you’ve got a rig that can crank up the AA and textures, but the significant potential for customising the settings and improving performance does allow the PC version to edge out, even if you don’t have a shiny new rig.

Keep an eye out for my full review soon.