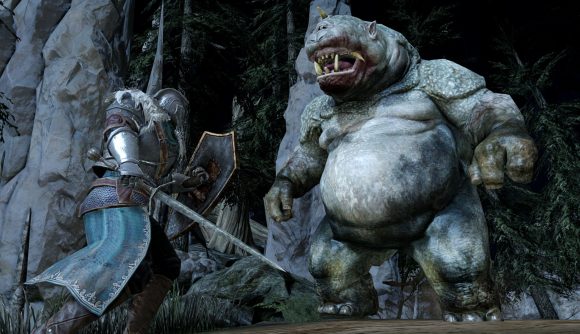 Earlier this month, Rory Powers, Daniel Krupa, and Gav Murphy announced a new YouTube channel called RKG. The new project essentially follows up on their popular Prepare To Try the trio ran while they were at IGN – a let’s play series all about working through some very difficult games. Now they’ve gone independent, and their first series comes with a special trailer featuring the voice of Dark Souls herself: Pik-Sen Lim.

Lim voiced the narrator in all three Dark Souls games, and she reprises that role in a trailer for RKG’s first proper video series. “An optimistic hero with an unbreakable spirit. A frustrated loremaster cursed with knowledge. And a dragon king with a defiled past. They abandoned their thrones and converged in a new land, with new chairs. In this land, they toil away in a small room, awaiting the end of the world.”

The voiceover concludes “It is called Retry, because sometimes the fire never fades.” The first episode of Retry – set to be the start of a Dark Souls 2 series – is scheduled to launch on January 26.

Videos come a day early for supports on Patreon – and judging by the dollar numbers the trio has pulled in so far, going independent was a solid choice.

Level up: Grind out the best RPGs on PC

You can see the trailer for yourself below.

The world of game journalism has seen plenty of folks make a terrific transition to YouTube, from Danny O’Dwyer’s NoClip documentaries to the entertainment and general coverage provided by the likes of Easy Allies and Kinda Funny. Here’s hoping the folks making up RKG find similar success.