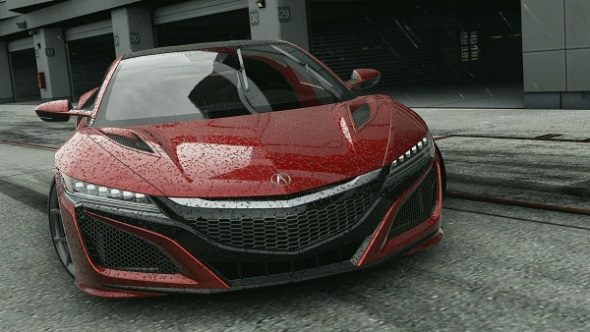 Bandai Namco and developers Slightly Mad have announced Project CARS 2, a super-polished motorsport sequel. It features an expanded roster of over 170 cars, as well as the largest hand-made track selection of any racing game.

While you’re waiting for all that, check out our list of the best racing games.

Take the wheel of everything from hyper-fast supercars to endurance prototypes across a range of conditions. With a dynamic day and night system that aims to “faithfully recreate the atmospheric conditions and ambience of a specific time of year”, you’ll have to contend with new racing conditions, including ice, tarmac, dirt, and snow.

“These features combined with dynamic weather and track effects, refined controls, and an authentic love of competitive esports guarantees players will be able to live-out their racing aspirations on multiple gaming platforms.”

As Hartness said, car physics have been improved, so the vehicles will feel different depending on the material they’re speeding down, even taking into account surface transitions, surface deformities, and tyre grip.

It looks gorgeous, too – as you can see in the trailer above. If you have a capable PC and screen, you can even play it in 12K. Yes, 12K. Hook up three 4K monitors and you’re good to go. If you’re not as bothered about resolution, you can play it in VR for extra immersion.

“We’re thrilled to pull off the covers on our publishing partnership with Bandai Namco and finally share more details on our latest build with Project CARS 2.” said Stephen Viljoen, game director. “Our collective goal at Slightly Mad Studios is to create a simulation racing experience that rivals that of real-life.

“Realism and authenticity are central to our development mantra for Project CARS 2, hence we’re making sure we employ the best professional drivers, game developers, artists, and sound engineers to realize our vision for a game that takes players on the ultimate driver journey.”

Expect it to be exceptionally balanced. Slightly Mad have esports aspirations for this sequel, and will be hosting online championships to highlight the very best players. It’s out sometime this year.